Tales from “The Master of Disaster” 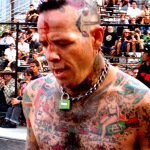 Daylight extends a little further into the evening with each passing day.  Moods ease.  Contentment rises.  These are some of the many delights the northern hemisphere has to offer this time of year.

As summer approaches, and dispositions loosen, something less amiable is happening.  Credit markets are tightening.  The yield on the 10-Year Treasury note has exceeded 3.12 percent.

If yields continue to rise, this one thing will change everything.  To properly understand the significance of rising interest rates some context is in order.  Where to begin?

In 1981, professional skateboarder Duane Peters was busy inventing tricks like the invert revert, the acid drop, and the fakie thruster, in empty Southern California swimming pools.  As part of his creative pursuits, he refined and perfected the art of self-destruction with supreme enthusiasm.  His many broken bones, concussions, and knocked out teeth earned him the moniker, “The Master of Disaster”.

But as The Master of Disaster was risking life and limb while pioneering the loop of death, the seeds of a mega-disaster were being planted.  In particular, the rising part of the interest rate cycle peaked out in 1981.  Then, over the next 35 years, interest rates fell and these seeds of mega-disaster were multiplied and scattered across the land.

When credit is cheap, and plentiful, individuals and businesses increase their borrowing to buy things they otherwise couldn’t afford.  For example, individuals, with massive jumbo loans, bid up the price of houses.  Businesses, flush with a seemingly endless supply of cheap credit, borrow money and use it to buy back shares of their stock…inflating its value and the value of executive stock options.

When credit is tight, the opposite happens.  Borrowing is reserved for activities that promise a high rate of return; one that exceeds the high rate of interest.  This has the effect of deflating the price of financial assets.

Today, the interest rate on a 30-year fixed mortgage is about 4.5 percent.  And the median price of a U.S. house is now about $330,000.  Along the Country’s east and west coasts, prices are much higher.

Similarly, the Dow Jones Industrial Average (DJIA) was roughly 900 points in 1981.  Today, the DJIA is about 24,700 points.  That comes to over a 2,600 percent increase.  Yet over this same period, nominal gross domestic product has only increased by roughly 500 percent.

We suspect a 35-year run of cheaper and cheaper credit had something to do with ballooning stock and real estate prices.  Asset prices and other financialized costs, like college tuition, have been grossly distorted and deformed by three decades of cheap credit.  The disparity between high asset prices and low borrowing costs, have positioned the world for an epic mega-disaster.

The Federal Reserve has an extreme and heavy handed influence over credit markets.  But they’re not masters of it.  The fact is, Fed credit market intervention plays second fiddle to the overall rise and fall of the interest rate cycle.

From a historical perspective, today’s 10-Year Treasury note yield of 3.12 is still extraordinarily low.  But if you consider just the last two years, it’s extraordinarily high.

Tales from “The Master of Disaster”

In this disinflationary environment, the credit market limited the negative consequences of the Fed’s actions.  Certainly, asset prices increased and incomes stagnated.  But consumer prices did not completely jump off the charts.

The Fed took this to mean that they’d tamed the business cycle.  This couldn’t be further from the truth.  During the rising part of the interest rate cycle, as demonstrated in the 1970s, after the U.S. defaulted on the Bretton Woods Agreement, Fed interest rate policy becomes increasingly disastrous.

Fed policy makers are politically incapable of staying out in front of rising interest rates.  Their efforts to hold the federal funds rate artificially low, to boost the economy, no longer have the desired effect.  In this scenario, monetary inflation breeds consumer price inflation.  Fed policies become policies of disaster.

It appears that in July 2016, roughly 35 years after it last peaked, the credit market finally bottomed out.  Yields are rising again.  In truth, they may rise for the next three decades.

This means the price of credit will increasingly become more and more expensive into the mid-21st century.  Hence, the world of perpetually falling interest rates – the world we’ve known since the early days of the Reagan administration – is over.

But what about The Master of Disaster, Duane Peters?  Well, Duane, you see.  He’s a true iconoclast.  He’s much more stubborn than the credit market.

At age 55, he continues to pursue disaster with the relentless composure of a fly smashing into a kitchen window.  He also does so while refusing to wear a helmet, and while regularly cracking his skull open on the concrete.  Yet, somehow, he keeps on going.

The Federal Reserve and the dollar, however.  They don’t stand a chance.  The rising part of the credit market cycle will be their death knell.  But first, rising interest rates and deflating asset prices will wreak havoc and disaster on the world at large.

It won’t be pretty.  It will be painful.

Our advice: Make like The Master of Disaster.  Take your lumps, and keep on going.

Return from Tales from “The Master of Disaster” to Economic Prism

This entry was posted in Inflation, MN Gordon and tagged collapse, duane peters, interest rate, the master of disaster, treasuries. Bookmark the permalink.

1 Response to Tales from “The Master of Disaster”