The Backstory on Our California Exodus 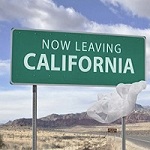 Along the 32nd parallel, in San Diego, where the western march of America’s manifest destiny collides with the Pacific Ocean, the sunsets are always perfect.

The view from the coast here is due west.  It is also south of the Channel Islands.  The setting is completely unobstructed.

Reds, yellows, oranges, purples, and pinks radiate out from the sun as it drops to the waterline.  The colors swirl across the sky and dance and glisten off the glassy water.

We watched the great ball of hydrogen slip beneath the liquid horizon while bobbing just offshore on our surfboard nearly every day for several years that encompassed the mid-1990s.  Staying in the water for sunset was essential.

The old fishermen who casted their lines off the rocks near PB Point spoke of an extremely rare green flash.  If one was lucky, the green flash could be observed just as the sun dips below the waterline.  The Jules Verne novel “Le Rayon-Vert” (The Green Ray), published in 1882, described it as:

“A green which no artist could ever obtain on his palette, a green of which neither the varied tints of vegetation nor the shades of the most limpid sea could ever produce the like!  If there is a green in Paradise, it cannot be but of this shade, which most surely is the true green of Hope.”

Aside from Verne’s mention, we had nothing to confirm the green flash was real.  This was in the ancient days before the World Wide Web could be called upon to validate the tall tales of fishermen.  After all the perfect sunsets we’d watched, the magical green flash remained elusive.

Several years later we’d moved to the 33rd parallel, in Long Beach, at the southern edge of the big bad Los Angeles Basin.  Here the shore faces south; not west.  Instead of setting over the water, the sun sets over the Palos Verdes Peninsula to the west.

The colors are still magnificent.  But without a view of the sun dipping beneath the water there’s little chance of witnessing a green flash.

Regardless, our wave riding days had come to an end.  But we did eventually get our confirmation.

On a December evening in the late-1990s, while making a brief return to the 32nd parallel, we caught a glimpse of the elusive green flash from the Mission Beach boardwalk.  It was just as Verne described.  Then it was gone.

That’s the first and last green flash we’ve ever seen.  It’s the only one we ever needed.

The place you’re born and raised, and if you remain into adulthood, becomes a part of you.  And you become a part of it.  Like the salt crust left from evaporated sea water, the sights, the sounds, the smells all leave their marks.

Any thought of ever leaving is quickly suppressed like a bad dream.  ‘Where would you ever go?’  ‘What would you do?’

Yet overtime, like an itch, if you scratch it, the thought of moving grows and grows.  Slowly, the thought changes from ‘no, never’ to ‘maybe one day.’  The question also changes to, ‘How bad would things have to get to leave?’

All places have their tradeoffs.  For Southern California coastal areas, the tradeoff is near perfect weather and an endless array of entertainment for high costs, terrible traffic, air pollution, intermittent drought conditions, and, in many places, high crime.

California politics, of course, have always been wacky and zany.  It is the ‘land of fruits and nuts,’ after all.  Sky high taxes are something to grumble about.  But not something to take too seriously.  Calling it the ‘sunshine tax’ somehow makes it tolerable.

So, too, the homeless problem in the big urban centers has always been a mess.  Yet over the last decade it got progressively worse.  Mass encampments, and all the blight and human degradation that goes with it, became another facet of life.  One that’s in your face – and your family’s face – everywhere you go.

Several years ago, the zombie apocalypse descended upon our neighborhood.  Shopping cart pushers and drug addicted arm flappers became something we observed from our living room window.

Watching your neighborhood slowly degrade over many years can be dispiriting.  The choice becomes that of fight or flight.  With a little contemplation, the only real choice is flight.

Were the good hardworking people that remained in Detroit after liberal policies destroyed the city in the 1960s rewarded for their loyalty?  What about those who stuck around Camden?

Fish Out of Water

The coronavirus hysteria, and how our state and local government went full tyrannical retard, was the clarifying event.  We could no longer live under the boot of these control freak sociopaths.  Moreover, their socialist policies had become more than just a nuisance.  They were, in fact, turning many of the urban areas into unlivable hellholes.

If the coronavirus hysteria prompted the authorities to behave like despots, what would happen when there was a real crisis?  What would these madmen do if there was a massive natural disaster, or an economic depression?

But that wasn’t all.  Woke culture multiplied with the coronavirus hysteria and ricocheted about like metastatic cancer.  On May 31, 2020, Black Lives Matter rioters torched the City of Long Beach – the city we’d lived in for nearly 20 years – and looted the stores.  The National Guard was summoned to quell the violence and a state of emergency was declared.

The riots were stopped.  But not entirely.  Thanks to Soros-backed LA County District Attorney George Gascón, flash mob smash and grab robberies continue.  Windows at local shops and stores are frequently boarded up.

On top of that, the local schools overtly promote transgenderism and encourage children to self-mutilate themselves.  There’s currently a bill proposed, SB107, which would allow courts to take away parents’ rights if their child comes to the state for “gender-affirming healthcare”, including trans-drugs and trans-related surgeries.

Before we pulled our son out of the local Long Beach public high school, he was learning history from someone that went by Mx.  The teacher – a dude with a green beard – was uncertain if he was male or female.  So, he used Mx. instead of Mr. or Ms.

This was all in alignment with the state Department of Motor Vehicles nonbinary gender designation (X, as opposed to M or F) for driver licenses and identification cards.  If your driver license says you’re gender X, you couldn’t possibly be a Mr., could you?  You must be an Mx.

We could go on and on.  The point is, over many decades the California we’d known and loved had changed.  We’d failed to change with it.

We were like a fish out of water.  Gasping for life.  We had to move.  But where?

Once the decision is made to leave the only place you’ve ever known, you are faced with another difficult question: where to go?

With all the madness taking shape around us over the last several years the question was answered by contemplating everything we wanted to get away from.  A partial list included:

We also thought about what we were after:

The California exodus has been going on for many years.  Some of the more popular destination states have been Texas, Nevada, Arizona, Idaho, and Florida.  For various reasons none of those states appealed to us.

Instead, the state that caught our attention was Tennessee.  More exactly, East Tennessee – near the Great Smoky Mountains.

Living by the beach had always been vital.  Yet as we got older, the mountains increased their allure.

The mountains in California, while nice to visit, are dry tinderboxes.  Just one spark and they go up in flames.  The mountains that cross through East Tennessee, while more subtle, are much more livable.

Still, we weren’t quite ready for a small town.  But a small city, with traditional values and an abundance of nearby scenic attractions – mountains, lakes, and rivers – is what we were looking for.  After visiting Tennessee in April, we decided Knoxville was just the place to move our family and our business.

Fair or not.  There’s a perception that Californians flee the Golden State only to vote for and transform their new locales into the failed states they left.  For example, the influx of Californians to the Pacific Northwest in the 1990s and early 2000s permanently changed the character of cities like Portland and Seattle.

The steady influx of Californians contributed to higher real estate prices.  This also contributed to the growth in state and local government.  More recently, this has happened in Austin and Boise.

Here in Tennessee, the locals are rightly concerned the mass migration of Californians will spread the cultural and economic rot of socialism into their freedom loving land where people believe there’s something precious about traditional American values that must be preserved.

We’ve received some skeptical looks and even a few vocal reactions from people when they learn we’ve just moved here from Long Beach, California.

“Why on earth would you move to Knoxville?!” was the reaction from one lady at the local marina boathouse.  “This is a very conservative city.”  Ironically, she did acknowledge that she moved here too – but she’s okay, because she moved from Fort Worth, Texas (not California).

“Don’t California My Tennessee” bumper stickers and T-shirts are popular.

The sentiment is clear.  If you’re going to bring left coast politics, you’re not welcome.

This is all fine by us.  Our 2,200-mile move was to escape the liberal hellhole in California.  Hence, we’re more passionate about keeping Marxist policies out of Tennessee than many Tennesseans.  Why?

Because we’ve lived through it.  We have firsthand experience with how it destroys cities and communities.  And we want no part of it.  Nor do other California transplants, like the Hoag Family, who recently recorded a very thoughtful discussion on the matter.

The Backstory on Our California Exodus

So that, in short, is the backstory on our California exodus.  Yet it is only half of the story.

The other half of the story doesn’t only have to do with finding greater freedom and new adventure.  Rather, it has to do with how to arbitrage your life for greater financial security and abundance.

Arbitrage, if you’re unfamiliar with the term, is an investment strategy where an investor simultaneously buys and sells an asset in different markets to take advantage of a price difference and generate a profit.  Moving from one area to another, when done right, allows you to arbitrage your life.

We’ve had many investment wins over the years.  Still, in our experience, the opportunity to arbitrage your life brings about more wealth and abundance – and at a much shorter duration – than most stock picks ever could.

In fact, how to arbitrage your life was covered in detail in the recently published August edition of the Wealth Prism Letter.  Paid up subscribers have already discovered exactly how to go about it.  If you’d like to explore this opportunity too, take action and subscribe today!  You’ll be given immediate access.

Greater freedom, financial security, better quality of life, and new adventure are yours for the taking.  So, take them.

You’ll be glad you did.

Return from The Backstory on Our California Exodus to Economic Prism

1 Response to The Backstory on Our California Exodus