Have We Entered the New Dark Ages? 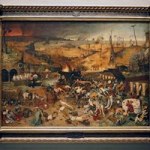 Elizabeth Warren must be a fool.  That, or she thinks the rest of us are fools.

The Senator recently took to CNN to publicly fret over the Federal Reserve’s rate hikes.  She’s worried they will tip the economy into recession.

What’s Warren afraid of?  Her fears have already come true.

The U.S. economy already is in a recession.  GDP data alone shows the economy contracted in both the first and second quarter of 2022.

The technical definition for a recession has long been understood to be two consecutive quarters of declining GDP.  So, by definition, the economy is in a recession.  Everyone knows this, save President Biden and Warren.

Recessions may not be agreeable.  But they are necessary.  In fact, the present recession is precisely what’s needed to clean up the consumer price inflation mess that Warren and her colleagues made.  There are consequences for mass money printing.  And they must be reckoned one way or another.

The fundamental fact is today’s consumer price inflation fiasco is a direct result of Washington’s spending policies.  The coronavirus hysteria provided the perfect excuse to spew printing press money into the economy.  Warren was one of the greatest advocates.

The Fed, for its part, merely obliged the wishes of Congress.  It created credit from thin air and loaned it to the Treasury in the form of Treasury note purchases.

The Treasury then obliged the wishes of Congress.  It used the money that was borrowed from the Fed to fund stimmy checks, PPP, and generous federal unemployment payments.  This was all to meet the legislative demands of Warren and the other knaves in Congress.

There’s never a good time to spew printing press money into the economy.  But the years 2020-21 were particularly bad.  That’s because governments the world over locked down their economies for no good reason at all.

The United States, Europe, and nearly every government across the globe took its cues from Communist China.  The coronavirus curve wasn’t flattened.  But the economy was.

Then politicians like Warren took a bad situation and made it vastly worse by spewing printing press money everywhere.  Maybe they thought they were helping.  Maybe they believed the promise of Modern Monetary Theory (MMT) would make all their socialist dreams come true.

Regardless, their actions were highly destructive.  And now we all must live in the discombobulated world they made.

The critical point is that the creation of greater quantities of money by central planners does not magically increase the quantity of goods and services.  The addition of newly created money is not readily greeted with a corresponding increase in production.

Similarly, newly created money does not magically increase people’s claims to goods and services.  It does not increase how much they can consume.  Rather, it dilutes each individual monetary unit, which then appears as rising prices.

The 2020-21 government mandated lockdowns succeeded in disrupting supply chains.  Many links in the chain were broken.  Some supply chains that were incrementally connected over the last 30 years were broken forever.

There’s no going back to the way things were prior to March 2020.  Yet, in addition to the ramifications of government mandated lockdowns and mass money spewing, the world continues to change in important ways.

Geopolitical shifts since the start of the Russian-Ukraine war are momentous.  Sanctions imposed on Russia have put Europe in a position where it can no longer consume cheap, abundant Russian natural gas.

This is an example of a supply chain that’s broken for good.  It will never be repaired.  The implications of this new reality are just setting in as winter appears in the distance.

Germany is particularly vulnerable to disruptions in Russian gas.  Before the war started, more than half of its gas came from Russian imports.  Now Germany is having to quickly develop contingencies.

One option is to restart coal plants that had already been shut down as part of its plan to phase out coal by 2030.  But coal is also in a supply crunch.

In Poland, for example, cars are lining up at the Lubelski Wegiel Bogdanka coal mine.  People are waiting day and night to stock up on heating fuel in advance of winter.  Demand for coal has forced Bogdanka and other mines to ration sales.

What’s going on here?  How did everything get so screwed up?  Have we entered the new dark ages?

Have We Entered the New Dark Ages?

Unless there’s a miracle, this winter will be an absolute calamity for Europe.  French President Emmanuel Macron recently clarified the situation for his cabinet.

Spanish Defense Minister Margarita Robles also warned of what’s to come, saying, “We [Europeans] are going to have a winter of great suffering.”

Both Macron and Robles fail to mention the source of the great upheaval and winter of suffering.  That it’s elitist policies from the U.S. and Europe that have put everyone in such a pinch.

In reality, there is an abundance of resources and the talent and capability to efficiently deliver them to market.  But government lockdowns, climate change policies, and senseless sanctions are standing in the way.

One example of the absurdity of it all was recently identified by ZeroHedge, who detailed how Europe is paying inflated prices for Russian liquified natural gas (LNG) that’s been laundered through China.  Somehow ‘dirty’ LNG from Russia magically becomes ‘clean’ when it’s brokered from China.

Here in the U.S. these mega disruptions are less pronounced, at least for now.  Yet the U.S. is not exempt.  Not with the current cadre of elitists doing everything they can to inhibit productivity and then paper over it with printing press money via misnomers like the Inflation Reduction Act.

As noted above, the U.S. is already in a recession.  The bear market rally has stalled out and reversed just as the calendar turns to September – the worst month of the year historically for U.S. stocks.  And September is followed by October, a month which has delivered several of the most epic stock market crashes on record.

So as the market slides into the fall, and the economy contracts, high consumer prices will persist.  They must.  Elitist policies assure it.

There is one way out, however.  But it won’t be very pleasant.  As the Fed yanks the cheap money rug out from under the economy the recession could turn into a decade long depression.

And if that doesn’t do it, a new dark ages will.

Return from Welcome to the New Dark Ages to Economic Prism

34 Responses to Have We Entered the New Dark Ages?