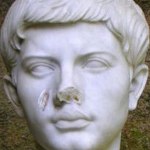 Roman poet Virgil penned these words in his epic, The Aeneid, roughly a generation before the birth of Jesus of Nazareth.  They can be loosely translated to, “the descent to hell is easy.”  Those who’ve traversed this passage can attest to the veracity of this axiom.

Though not apparent in the milieu of Virgil’s poem, for our purposes today, we’ll extend its application to the insidious progression of currency debasement.  What short utterance more aptly characterizes the steady degradation, as currently practiced by today’s church of state?

Yesterday [Thursday], for example, the House acted with untroubled ease to further America’s descent to hell.  With little resistance, federal spending was increased and the debt ceiling was suspended for two years.  Having delivered tomorrow’s curses, the nation’s Representatives can skip town without missing a moment of summer recess.

As you can see, the allure of getting something for nothing is far too enticing for even the most honest politician to pass up.  And with an endless supply of fake money behind you, why stick your neck out and get clobbered?  The public debt encumbered is already well beyond honest repayment.  But that’s a problem for tomorrow; not today.

Representative government in America, circa now, has nothing to do with upholding individual freedoms and liberties.  Nor is it about making tough decisions in the interest of the long-term health of the nation.  It’s about doing the expedient – and suspending the debt ceiling so the descent to hell can be made as comfortable as possible.

Wreckage from the Past

Rarely are people capable of understanding the full implications of a forthcoming catastrophe of their making.  Perhaps, it’s not because they’re truly incapable of it.  More likely, it’s because they’d rather ignore it.

Facing up to the facts of an unpleasant reality can be painful.  It also implies a recognition that what one has been doing isn’t working.  And that the arduous task of righting one’s wrongs must be initiated forthright.

Pursuing delusion, of course, is abundantly easier – for a time.  However, as the wreckage piles up from the past to the present, the day of reckoning becomes much more ominous.  There really is no escaping it.

Certainly, Congress is far from this recognition.  Otherwise, they’d get serious about the nation’s fiscal doom, tighten their belts, reverse course, and suffer the immediate consequences.  But that’s not what’s happening at all.

Instead, Congress is doubling down on their wreckage from the past.  They’re blowing the debt out like there’s no tomorrow.  The insanity of it, even for a casual observer, is near impossible to ignore.

Hence, over the last 20 years the national debt has increased 320 percent.  But over this same period, nominal gross domestic product (GDP) has only increased 100 percent.  What’s more, this divergence stands to get much more extreme…

When the next recession arrives, and Washington pulls out all the stops to counteract it with massive new applications of debt based stimulus, the debt will go vertical while GDP flat lines or contracts.  These different trajectories will be reconciled by default or price inflation.  Washington, no doubt, prefers price inflation.

The popular delusion of the 21st century is to assume the highest virtues of democracy.  This faulty assumption  propagates a dangerous archetype: the tyranny of the masses and its twin consequences, deficits and inflation.

Voters want a free lunch.  They want their neighbors to pay for it.  They elect stooges to office who promise massive social welfare, public works, and defense spending programs.  Then, the hack economists advance an absurd theory – like Modern Monetary Theory – to deliver something for nothing.

The deficits mount up year after year, the currency’s debased year after year, until something gives.  In short order, confidence evaporates and price inflation explodes.  The country succumbs to political, economic, and cultural destruction.

Indeed, the descent to hell is easy.  But Virgil also adds a lesser known corollary, “Sed revocare gradum, superasque evadere ad auras, Hoc opus, hic labor est,” which can generally mean, “But to retrace the way and return to the upper airs; this is the task, and where the mighty labor lies.”

This entry was posted in Government Debt, MN Gordon and tagged catastrophe, debt ceiling, fiscal doom, the descent to hell is easy, virgil. Bookmark the permalink.

18 Responses to Realizing the Full Implications of the Forthcoming Catastrophe