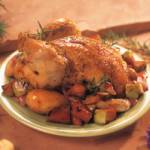 Sometime in the 1920s Walter Knott, an unsuccessful farmer, nursed several dying berry vines back to life at his Buena Park, California, farm.  Little did he know, his fortunes were about to change.

These unique vines were created by Rudolph Boysen, a horticulturalist, by crossing a blackberry, red raspberry and a loganberry.  The hybrid boysenberry, named after Boysen, turned out to be a huge hit, and the Knott family began selling massive quantities of the exclusive berries, preserves and pies, from a roadside stand along State Route 39.

About a decade later, Knott’s wife Cordelia began serving fried chicken dinners.  Who would have thought, but within a few years her chicken dinners had turned into a popular restaurant, with lines often several hours long.

But Knott didn’t stop there.  Building on their success Knott created a replica Ghost Town, train ride, and other attractions.  Within a few years, Knott had transformed his farm into America’s first theme park.

We spent the day with our family at Knott’s Berry Farm last Friday…picking boysenberry seeds from our teeth.  We walked through the ghost town and perused the leather and wood shops, road the Calico Railroad, Timber Mountain Log Ride, and the stage coach, among others.  We also had dinner at Mrs. Knott’s Chicken Dinner Restaurant.

Fortunately, we split the dinner with our wife…it was enormous.  Chicken noodle soup, green salad, buttermilk biscuits with boysenberry jam, fried chicken, mashed potatoes, chicken gravy, vegetables, and, of course, boysenberry pie.  All this for just $16.99 – what a deal, right?

We’ll never know.  We weren’t around back then to sample it.  But our gut tells us the meal was likely close to the same quality, taste, nourishment, and value back then as today.

Obviously, something else has gone on over the last 79 years…

One, the BLS probably underestimates its inflation calculations.  Two, the cost to produce a chicken dinner in 2013 costs more in inflation adjusted terms because of all the regulations the restaurant must follow.

State health requirements, minimum wage requirements, county food handling inspections, and social security and medicare payroll deductions.  Following all these rules isn’t cheap.  Certainly, the consumer’s on the hook for some of the cost burden.

Regardless, the realization that it takes somewhere between $11.33 and $16.99 to buy what $0.65 could buy in 1934 is downright appalling.  The purchasing power of the dollar has been utterly destroyed.  What could be causing this ongoing phenomenon?

The fact of the matter is, we are living in an era of ongoing and mass money debasement.  The main perpetrator of it all can be found in the collusive execution of fiscal and monetary policy by the Treasury and Federal Reserve.  These policies allow the Federal Reserve to create money from nothing to buy newly issued Treasury debt, resulting in continual money supply expansion and incessant increases in government debt.  Likewise, this results in a constant chipping away at the dollar’s value.

These policies of mass money debasement are something every hardworking and industrious individual must be aware of, and must take direct action to counteract.  Clearly seeking long-term wealth preservation by keeping money in the bank is futile.  So, too, drawing from the instruction of Mrs. Knott’s Chicken Dinner Restaurant, serving chicken dinners is an effective way to protect savings and build wealth in an age of mass inflation.