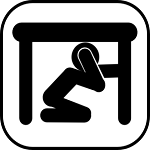 The future is here and it’s not all it was cracked up to be.  For example, one of the great disappointments of the 21st century, thus far, is the lack of flying cars.  Wasn’t this supposed to be the signature achievement of Tomorrowland?

The frustration was aptly expressed by PayPal cofounder and early Facebook investor Peter Thiel when he said, “We wanted flying cars, instead we got 140 characters.”  Of course, the 140 character reference is in regard to Twitter and its 140 character limit per tweet.

Indeed, Twitter is a second-rate alternative to flying cars.  What’s more, it has the ill-effect of reducing people’s brains to mashed potatoes.  In place of well-reasoned and thoughtful discourse, Twitter promotes inane statements from Congressional representatives and even the President.

But all is not lost.  For the flying car will soon be a reality.  The IFO – or Identified Flying Object – is a proposed two seat concept drone that looks like a UFO.  Not only does it fly.  It’s safe too.  According to its specifications, if the eight battery powered electric rotary engines run out of juice, the cockpit detaches and a parachute releases and safely guides the passengers to the ground.

From what we gather, the IFO concept isn’t all that novel.  Backyard enthusiasts have been developing and test piloting these contraptions for years.  We suppose these experimental flights are uninsured.

Naturally, it depends who you ask.  Tweets from flying cars are not for everyone.  For instance, one fellow may prefer a jumbo cola and a hot dog at a Major League Baseball game.  Another may favor reading a Dickens novel from a mountain cabin in the woods.

The crafty wizards at the Federal Reserve have contrived a world of declining interest rates for over 35-years.  Presently, savers get next to nothing on their capital.  Leverage addicted madmen, on the other hand, get rich.

In particular, financial psychopaths have been able to borrow gobs of money, plow it into assets – like stocks, bonds, and real estate – and then refinance every several years at lower and lower rates.  Plus, if that wasn’t good enough, they could count on the Fed to induce perpetually higher asset prices to bail them out if they got into a pinch.

If you can believe it, the yield on the 10-Year Treasury note has not gone up over this period.  Rather, it’s gone down.  From 2.58 percent on December 15 to 2.42 percent as of market close on Thursday.

What’s going on?  Is the Fed yet again manning the monetary controls without a clue?  Are the stagnant yields a sign that, once again, and despite many attempts following the Great Recession, the economy has had yet another failure to launch?

No doubt, time will tell.  However, at the moment, the commercial credit market has offered several utterances on the matter.  Here we’ll turn to The Telegraph for explanation:

“One key measure of US corporate borrowing is falling at the fastest rate since the onset of the Lehman Brothers crisis.  Money supply growth in the US has also slowed markedly.  These monetary and credit signals tend to be leading indicators for the real economy.

“Data from the US Federal Reserve shows that the $2 trillion market for commercial and industrial loans peaked in December.  The sector has weakened abruptly as lenders tighten credit, especially for non-residential property.  Over the last three months it has dropped at a rate of 5.4pc on annual basis, a pace of decline not seen since December 2008.

“The deterioration in the broader $9 trillion market for loans and leases has been less dramatic but it too is shrinking, falling at a 1.6pc rate on a three-month basis.  ‘Corporate lending has ground to a halt and I am staggered that the Fed is raising rates.  They have made a very big mistake,’ said Patrick Perret-Green from AdMacro.”

Certainly, the Fed always makes big mistakes.  The long and short of it is fixing the price of credit via a central planning authority is a fool’s game.  For whatever reason, Yellen and her cohorts are compelled to go after it with gusto – even as they further distort the world into absurdity.

Their plan, you see, is to fix their mistakes with even bigger mistakes.  When the credit market cracks in earnest, they’ll follow it up with something especially foolish.

Return from Failure to Launch to Economic Prism