Brazilian Model for Wealth and Prosperity 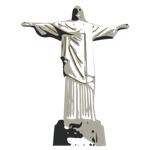 Booms and busts fueled by cheap credit are incredibly disruptive. What’s more, they’re exacerbated by central bank efforts to smooth out the business cycle.  Rather than rounding the peaks and tapering the bottoms, monetary policy, as currently executed, has the unfavorable effect of magnifying them.  There’s an abundance of fresh examples.

One of the more accentuating illustrations of recent years is China’s mass concrete binge.  Pumping credit to stimulate construction in China has had the ill-effect of compelling the country to do something extraordinarily incredible.  In short, they’ve mixed up massive amounts of concrete and splattered it across the landscape.

What in the world compelled an entire nation to behave like utter blockheads?  Unsurprisingly, misguided stimulus policies pushed everyone beyond the absurd.  This mass malinvestment and overbuilt capacity will take a long and painful period of adjustment before it realigns with the real economy.

Of course, the abundance of raw materials that went into China’s massive construction projects had to come from somewhere.  People and entire nations readjusted a certain part of their mode of existence to supply the basic materials to support China’s epic building boom.  What happens to these places when the boom turns to bust is currently being revealed…

No Miracle Option for Brazil

For today’s edification, we look to Brazil…where things have become incredibly disagreeable.  Earlier this month, for example, Brazil’s credit was downgraded by Standard and Poor’s from investment grade to junk.

From what we gather, Brazil’s rapid economic growth over the past decade was largely the result of commodity exports to China, its largest trading partner.  As the economy boomed, Brazil’s government didn’t take the additional revenue and use it to pay down debt.  Instead, they did the opposite.  They spent like drunken sailors.  So now that commodity prices have crashed, and exports to China have subsided, the budget deficit has widened to a giant gaping chasm.

This, in turn, is wreaking havoc on Brazil’s currency.  “On Tuesday, the Brazilian real hit its weakest point since the currency was introduced in 1994.  Trading as low as 4.0667 to the dollar, the real has lost 35 percent of its value against the dollar so far this year.”

Naturally, when a currency rapidly loses value price inflation rapidly increases.  In Brazil’s case, price inflation is expanding at a rate of 9.6 percent while the economy is contracting.  This leaves little ability for a quick monetary policy response.

The classic central bank scheme of pushing down interest rates to stimulate demand will only serve to further stimulate price inflation.  Hence, Brazil needs dramatic cuts to deficit spending, which will further exacerbate the contraction, or some sort of miracle of recovering commodity prices and new demand from China.  Obviously, the miracle option is near impossible.

Fortunately, Brazil has a remarkably novel way out of its economic flailing…

Brazilian Model for Wealth and Prosperity

If you can believe it, the real’s rapid loss of value against the dollar has created a new economic boom of sorts.  However, instead of mining and exporting commodities to China, Brazil has hitched its wagon to a new horse.  Namely, Brazilian butt lifts and tummy tucks.

“From buttocks enhancement to wrinkle reduction, Brazilian cosmetic surgery is becoming a bargain for visitors as the real collapses against the U.S. dollar,” reports Bloomberg. “Gomes [a teacher from Dallas Texas] is part of a growing number of medical tourists taking advantage of the bargains, a rare commercial bright spot in a country facing the worst recession in nine decades as well as a political crisis.

“A $500 skin treatment in Dallas runs only about $25, or 100 reals, in Brazil, according to Gomes, whose pending trip will be her third this year for a beauty touch-up.  Four hair-removal sessions in Brasilia will cost 300 reals, barely one-tenth as much as single full-face U.S. treatment.”

Sounds like quite a deal, indeed.  Who can pass up a 90 percent discount?

Nonetheless, in all of recorded history, we’re not aware of a country that has attained wealth and prosperity through cosmetic surgery.  Perhaps Brazil will make this economic model work…but it’s unlikely they’ll be able to deliver enough body augmentations to “grow” their way out of their deficits.

Unfortunately, an actual economic tummy tuck takes more than a visit to a Brazilian doctor.  Rather, it takes real work.  Stimulating demand with cheap credit won’t cut it.

Savings and investment, diligence and hard work, and prudence and perseverance are what are needed.  But why bother?  Central bankers will chisel away any grubstake you cobble together faster than you can say lickety-split.

Return from Brazilian Model for Wealth and Prosperity to Economic Prism

1 Response to Brazilian Model for Wealth and Prosperity