Views from a Top of the Skyscraper Index 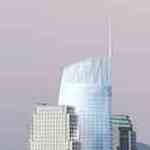 On a warm Friday Los Angeles morning in spring of 2016, we found ourselves standing at the busy corner of Wilshire Boulevard and South Figueroa Street.  We were walking back to our office following a client wire brushing for events beyond our control.  But we had other thoughts on our mind.

Amongst a mob of pedestrians, we gazed up at the skeleton frame of what would become the Wilshire Grand Center.  For the first time in several years the buzz and hum of diligent building activity was eerily silent.  In fact, construction efforts were shut down for the day.

Sadly, less than 24 hours earlier a distraught electrician had taken a swan dive off the 53rd floor.  The man’s death prompted an immediate work stoppage and evacuation of the tower.  “It sounded like a bag of cement fell off the edge of the building,” one observer remarked.

Naturally, the sound of impact was far too grim for us to contemplate.  Instead, we wondered how time must have simultaneously slowed down and sped up for the jumper as they descended toward the ground.  Did they want a redo before it was game over?

We have a hunch that over the next couple of years, vast numbers of people are going to experience the rush that comes when time simultaneously slows down and speeds up.  Not because they’ve committed a base jump off a skyscraper – though some will.  Rather, it’ll occur at the precise moment they come to the rude realization that they’re broker than broke.

We’ll have more on this in just a moment.  But first some context is in order…

Several weeks ago the Wilshire Grand Center officially opened.  The building claims to be the new tallest building in Los Angeles, and tallest building west of the Mississippi.  But we have some reservations.

Because the top of the Wilshire Grand Center is actually about 18 feet shorter than the U.S. Bank Tower that’s several blocks away.  However, there’s a bizarre looking 100-foot spire at the building’s peak.  Apparently, this spire has a very determined purpose.

Per the Council of Tall Buildings and Urban Habitat – if you can believe there is such a thing – a spire is considered an architectural feature and is, thus, counted when measuring the building’s 1,100 foot height.  Tall buildings arbiters’ aside, we ain’t buying it.  But our opinion on the matter doesn’t matter.

Korean Air / Hanjin Group financed construction of the Wilshire Grand Center.  The claim that this is the new tallest building west of the Mississippi, regardless of spire gimmickry, offers Korean Air Chairman Yang Ho Cho a grand ego stroke.  We recommend that he enjoys it now before he rues it.

You see, the construction of marque skyscrapers has an uncanny track record of coinciding with the late stages of an artificial, cheap credit induced building boom.  If this holds true, the Wilshire Grand Center will forever be a monument to ZIRP, NIRP, and QE.  What’s more, there are several other new skyscrapers monuments that’ll be opening their doors real soon.  This can only mean one thing…

Views from a Top of the Skyscraper Index

The skyscraper index was first elaborated by Andrew Lawrence in January 1999.  The idea is simple enough.  The world’s tallest buildings are often completed on or around the onset of economic downturns.

What the skyscraper index does is it accounts for the long lead time that massive ego stroke projects like construction of the tallest building in the world take to come to fruition.  By the time these mega edifices are complete the free flowing credit that bubbled up their construction, and other bubbles throughout the economy, has nearly exhausted itself.  This is about the time the boom turns to bust and the economy slips into recession.

Based on the open date of the Central Park Tower and the Jeddah Tower, the Wilshire Grand Center may be an early indicator of the approaching panic.  The timing is hard to precisely pin down.

These asset price inflation puffers are always fleeting.  Views from a top of the skyscraper index show a coming day when time simultaneously slows down and speeds up in a great manic panic.  This is the day the debt edifice crumbles.  Why wait to get your financial house in order?

11 Responses to Views from a Top of the Skyscraper Index