The Fatal Dangers of a Fading Bull Market Run 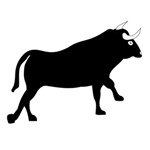 It is too bad that mobile devices don’t set off a signal before their users do something terminally stupid.  Perhaps a warning alarm would help them change course.  Rather than texting and walking in front of a city bus, the preoccupied mobile user would be signaled to look up before stepping off the curb.

Instead, mobile devices offer an intoxicating distraction.  They actually entice people to do things they’d otherwise know better than.  Add the glory of capturing a public jaw dropper real-time and instantly posting it to YouTube or Instagram and the opportunities for stupidity are endless.

He was, no doubt, marveling at his footage of a motionless bull lying on the ground just before something even more astounding happened.  In hindsight it would’ve been better to have stayed in bed that morning.  For as Lopez paused to gawp at the video he’d just recorded another bull charged and pinned him up against the wall and repeatedly gored him, including a fatal gore to the neck.

“‘He looked like a puppet spinning around in the air because he didn’t fall to the ground,” commented Juan Jose Losana.  Lopez, a spectator at the running of the bulls in Villaseca de la Sagra, Spain, had left a protected area closed off with metal bars to video the repercussion of a collision between two bulls.  That is when a third bull charged him from behind prematurely ending his life on earth.

Risks and Repercussions of a Dying Bull

Obviously, this is a very unfortunate incident.  It is also very avoidable.  Here we do not bring this up to make light of Lopez’s untimely fate.  Rather we look for edification.  What follows are some ideas that come to mind.

For starters, when running with the bulls don’t take undue risks.  In the midst of a six year bull market run, for example, where stocks are overvalued by every historic metric, it’s highly unlikely they’ll go up much more.  Why put yourself in harm’s way for the chance of riding the final huff and puff of a blow off top?

Secondly, don’t try to outsmart a dying bull.  The stock market appears to have finally peaked out.  The DOW has fallen over 900 points since May 19.  That’s more than a 5 percent decline.

Maybe this is a temporary pull back, as happened in 2011.  If so, buying the dip would be a very shrewd move.  Nonetheless, the risks facing the market today have increased since 2011.  The similarities are more in line with 2008.

In 2008, if you recall, the stock market slowly slid throughout the summer.  But it wasn’t until autumn that it really began to freefall.  Those who bought the dip as the market slid – like Bill Miller of Legg Mason’s Value Trust Fund – only dug their own grave.

The Fatal Dangers of a Fading Bull Market Run

Lastly, Lopez’s experience tells us that we should always be prepared for the unexpected.  When a bull run has broken down there’s always the possibility that an angry rogue bull will be roaming around, looking to inflict maximum pain upon those who cross its path.

Just this week, for example, central planners in China devalued the yuan…three days in a row.  On Tuesday the DOW fell 212 points.  The overall implications for the stock market are unclear.  But surprise currency devaluations, or rate adjustments, can cause chaos to a fading bull market.

This is especially true with the yuan devaluation because the stock market is reacting to surprise government intervention…not free market forces.  The People’s Bank of China pegs the exchange value of the yuan to the dollar.  The exchange rate is not decided by the free market.

This year, as the dollar has strengthened against the euro, the yuan has been pulled up along with it.  This has made Chinese exports less competitive in Europe, which is its largest trading partner.  Chinese exports have declined as a consequence.

Of course, the world isn’t as simple and predictable as the Chinese bureaucratic dunderheads want to believe.  Their efforts to fix markets may appear to work for the short term.  But they also bring about a pressure cooker of distortions.  Eventually, something gives and the top blows.

For American investors, gazing out across the fading twilight of an epic six year bull market run, it’s best to stay put, behind the metal bars and outside of harm’s way.  Even a quick venture beyond the protected area for a close up gander can be fatal.