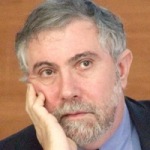 Clear economic thinking and lucid communication via the written word tumbled out of fashion nearly 100 years ago.  The fall from grace was triggered by the 1936 publication of John Maynard Keynes’ The General Theory of Employment, Interest and Money.

Not only is the book rigorously indecipherable.  It also has the ill-effect of making those who read it dumber.  Unfortunately, Keynes’ drivel became the standard for foolish economic thinking, which still infects economic discourse to this day.

Many politicians and establishment economists remain enamored with Keynes’ gibberish.  They love what it offers.  In short, it provides academic rationale for governments to do what they love to do most – borrow money and spend it on ridiculous programs.

For example, Keynes advocated filling bottles with money and burying them in coalmines for people to dig up as a way to end unemployment.  According to Keynes, this would provide jobs and money for the unemployed.  Somehow, these public works egg hunts would create an economic boom and make everyone rich.

Over the years this reasoning has inspired countless government stunts to save the economy from itself.  The American Recovery and Reinvestment Act of 2009 and the American Rescue Plan of 2021 are two mega Keynesian inspired spending bills passed this century.  The U.S. will never be able to overcome the consequences of these asinine programs.

Just over a decade ago, Keynes devotee, Paul Krugman, took the logic of Keynesian economics and ran with it to the outer limits of deep space.  In the process, he lost his mind.

Following his righteous departure from planet earth, Krugman went on cable television and explained that the proper way to propel an economic growth chart up and to the right is to borrow massive amounts of money and spend it preparing for an alien invasion.

Only a Nobel Prize winning economist could come up with such nonsense.

Paul Krugman, of course, is a complete madcap.  His days contemplating apparent aggregate demand insufficiencies and perceived supply gluts turned his brain to mush.  His time staring at graphs while pondering possible government policies to make the graphs show what he wants transformed him into a moron.

Krugman has unwittingly experienced a higher learning glut from within the confines of Princeton University.  In the pursuit of theory, he forgot one critically fundamental thing…how to think.

Yet occasionally, when buckets full of ice cold reality are repeatedly thrown in his face, Krugman has a brief moment of clarity.  Consumer price inflation raging at an annual rate of 9.1 percent appears to delivered that moment.

On July 21, 2022, Krugman penned on op-ed in The New York Times titled: “I Was Wrong About Inflation.”  In the article, Krugman focuses on the $1.9 trillion American Rescue Plan, which was passed in March of 2021 to counteract the economic consequences of government ordered coronavirus lockdowns.

In the op-ed, Krugman mentioned that some economists warned it would lead to rising inflation.  But that he, like many other Keynesian economists, was “fairly relaxed” about the stimulus package.  “As it turned out, of course, that was a very bad call,” admitted Krugman.

The experience over the last 18 months has shown the Keynesian nirvana of countercyclical stimulus spending to be absolute bosh.  Somehow, with all his liquidity trap graphs, Krugman couldn’t see what was so clearly obvious…

That printing trillions of dollars and directly injecting them into the economy via stimmy checks, PPP, and lavish unemployment checks would cause raging consumer price inflation.

Did Krugman think this would be another instance of pushing on a string, like the 2008 bailout of the big banks via AIG?  Did he think the fake money would largely remain within the financial sector like TARP funds did, and only slowly drip out into the real economy?

Maybe so.  Here’s Krugman’s rationale for his “very bad call.”

“Historical experience wouldn’t have led us to expect this much inflation from overheating.  So something was wrong with my model of inflation — again, a model shared by many others, including those who were right to worry in early 2021.

“In any case, the whole experience has been a lesson in humility…But in retrospect I should have realized that, in the face of the new world created by Covid-19, that kind of extrapolation wasn’t a safe bet.”

Apparently, Krugman’s model of inflation is a great big dud.  It failed to forecast the greatest consumer price inflation blowout in over 40 years.  If it couldn’t do that, then what good is it?

To be clear, a model is only as good as its inputs.  The Keynesian approach of using aggregate data to identify apparent demand insufficiencies and perceived supply gluts is flawed.  Unemployment.  Gross domestic product.  Price inflation.  These data points are all fabricated up and fudged out to the government number crunchers liking.

For each headline number there are a list of footnotes and qualifiers.  Hedonic price adjustments.  Price deflators.  Seasonal adjustments.  Discouraged worker disappearances.  These subjective adjustments greatly affect the results.  So what good are they?

Now, where the rubber meets the road, failed Keynesian policies coupled with monetary madness have positioned the U.S. economy and financial system in an extraordinarily unfavorable place.  Where consumer price inflation is raging while the economy is contracting.

Just yesterday (Thursday), second quarter GDP data was released by the Commerce Department.  Between April and June the economy contracted at an annual rate of 0.9 percent.  This is on the heels of a first quarter GDP contraction of 1.6 percent.

Two consecutive quarters of contracting GDP meets the technical definition of a recession.  So, with shrinkage occurring in both Q1 and Q2, the U.S. economy is without a doubt in a recession.

Treasury Secretary Janet Yellen may say, “this is not an economy that’s in recession.”  But the facts – the government’s own fudged data – say otherwise.

Yet here’s where things really get interesting…

Because professional economists like Krugman and Yellen were wrong about inflation, and the Federal Reserve let it get away, the Fed is having to hike the federal funds rate in the face of a contracting economy.  This week the Fed hiked the federal funds rate another 75 basis points to bring it to a range of 2.25 to 2.50 percent.

How much higher can the Fed go before something breaks?

We’ll find out soon.  Moreover, we expect a mega disaster to arrive before inflation subsides.  At this point, the Fed will have to trigger a massive, 1930s-style depression to stop inflation in its tracks.

Here’s the point: Krugman was wrong.  He admitted it.  And we all get to pay the price for his terrible mistake.

[Editor’s note: Don’t let the mistakes of Krugman and other professional economists destroy everything you’ve worked so hard for.  This is a dangerous time.  For this reason, I’ve dedicated the past 6-months to researching and identifying simple, practical steps everyday Americans can take to protect their wealth and financial privacy.  The findings of my work are documented in the Financial First Aid Kit.  If you’d like to find out more about this important and unique publication, and how to acquire a copy, stop by here today!]

22 Responses to Paying the Price for Krugman’s Terrible Mistake