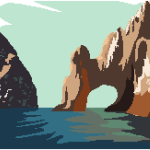 The native inhabitants of Cabo San Lucas, the Pericú, had a rough go of it in their twilight years.  First they were overrun by Hernán Cortés and his Spanish Conquistadores in the 16th century.  Then, two centuries later, Jesuit missionaries told them what position to make love in.

Naturally, the Pericú revolted against the Jesuits.  But the combination of combat deaths and old world diseases irreversibly thinned out their population.  By the late 18th century they were culturally extinct.

When Hatsutaro, a Japanese castaway whose adventures were chronicled in the book Kaigai Ibun, landed in Cabo San Lucas in 1842, there were only two houses and about twenty inhabitants.  As far as we can tell, the place continued in slumber for the next 60 years.  In the early 20th century, however, the fishing trade brought development to the area.  Then, by the mid-20th century, Cabo San Lucas had become a popular vacation destination and the coastline was dotted with large scale tourist developments.

This, of course, is what brings us to this locality.  We are here for several days on family vacation.  Nonetheless, we still labor on your behalf…putting pen to paper for your reading enjoyment.

But today we’ll deviate from our usual deliberations on money and markets to bring you an abbreviated article on the sights, sounds, and smells emanating from the southern tip of Baja California Sur.

Sunrise and Sunset in Paradise

Sunrise and sunset are always sublime in paradise.  Sitting poolside, at our hotel’s patio yesterday morning, we sipped our coffee and ate huevos rancheros while the sky opened up above us.  The morning crimson faded giving way to the bright golden sun.  The turquoise waters extended out on the horizon.  Below us small waves crashed onto the rocks and ran up the soft beach in a low-pitched rhythm.  What was left of the cool nighttime breeze greeted us with fresh smells of the saltwater sea.

Something magical happens at the confluence of the Sea of Cortez and the Pacific Ocean.  The rugged coastline gives way to meandering coves, sandy beaches, and partially eroded rock formations.  The warmer water from the Sea mixes with the cooler water of the Pacific, creating a unique underwater environment of colorful tropical fish, rocky reefs, and a variety of marine creatures.

This is where California’s expansive desert coastline finally terminates – at Golfo de California – and dips below the water for the last time.  At Lands End, El Arco provides one last gathering place for Sea Lions before the earth is completely swallowed by the ocean.

In the evening, after a day of swimming and splashing about, we strolled over to the southeast end of the marina and marveled at the colorful fusion of red, orange, yellow, and purple clouds in the sky sparkling off the turquoise water at sunset.  We watched the marlin fishing boats returning with their trophy catches and admired the expansive prehistoric frigate sea birds perched on and hovering around The Arch.

Later we wandered into the town for a Mexican seafood dinner and to peruse the handicrafts displayed by the local vendors.  We ate fresh mango slices as we ambled about.  We even picked up a pair of huarache leather sandals.  Tomorrow we’ll do more of the same…

That’s about all we have time for.  But before we sign off we’ll leave you with some final notes we’ve scribbled down on the back of a napkin…

Return from Notes from Cabo San Lucas to Economic Prism