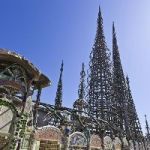 Italian immigrant Simon Rodia was a man of resolve.  He labored nearly every day from 1921 to 1955 chicken wiring steel pipes and rods together, pausing only to take swigs of malt liquor.

With singleness of purpose he focused his energy into erecting numerous towering eyesores in his backyard in the Watts district of Los Angeles.  No one really knows why.  Maybe he found it satisfying.

One day, after 34 years of this madness, Rodia abruptly stopped.  On a whim, he deeded the property to his neighbor and hopped a bus to the East Bay.  No one in Watts ever heard from him again.  But his monstrosities, known as the Watts Towers, are now a National Historic Landmark.

Over nearly two decades, we frequently rode the LA Metro Blue Line (now the A Line) from Long Beach to Los Angeles.  We’d peer out the window while traversing through Watts and wonder from what beautiful mind these towers were birthed?

Rodia, for his efforts, is immortal.  He’s one of the many faces on the cover of The Beatles’ Sgt. Pepper’s Lonely Hearts Club Band.  Look for the grimacing madman immediately left of Bob Dylan.

The Watts Towers are a story of dedication and improbable preservation in an area of blighted destruction.  There’s a nugget of value in these edifices, and the adjacent “Ship of Marco Polo” embedded with shells and bottle shards, which can only be appreciated within the context of their surrounding landscape.

In 1965, a decade after Rodia skipped town, and one month after his death, Watts went up in flames.

Today we look with prying curiosity not at Rodia or the determination that went into his zany creation.  But rather, for lessons from these symbols of resilience, which have remained through times of crisis.

On August 11, 1965, the opening salvos of the Watts riots were fired.  South Central Los Angeles burned to the ground over the following five days.  More than 30 people died.

Maybe with a little diplomacy the whole fiasco could have been avoided.  Or maybe not.  Some events – like a stock market panic – are not so much a question of if, but when.

In the hot summer of 1965, race tensions simmered across the southland.  The Watts riots could have been provoked by anything.  What’s more, there was an irresistible craving to sack small businesses for fun and for profit.

Ultimately, the riot was triggered when a policeman arrested a drunk driver.  The policeman was white.  The drunk driver was black.

The arrested man’s stepbrother wanted to drive the car home.  A practical request.  The policeman told him to pound sand, and had the car impounded.

Tempers flared.  The arrested man’s mother, who lived down the street, caught word of what was going on.  She took a break from cooking a rabbit to go claim her car and help her son resist arrest.

By then a hostile crowd had formed.  The resisting son was hit in the face with a baton.  One thing led to another, and the mother and stepbrother were handcuffed and placed in the back of a patrol car too.

Then someone claimed the police had kicked a pregnant woman.  Things escalated from there.

The riot began the next night.  The arrested man’s mother called for peace.  Her pleas were met with violence.

Bricks were thrown.  Windows were smashed.  Stores were looted.  Fires were set.  Over 1,000 buildings were burned.  Many to the ground.

There was also screaming.  Lots of it.

The policing strategy was real simple: let it burn.

Inside the “looter’s playground” rioters set the city on fire while screaming and chanting, “Burn, Baby, Burn!”

Right now, in a similar vein, as inflation rages at a 40 year high and investors panic, the Fed must stand back from the stock market…and let it burn.

The major U.S. stock market indexes were near all-time highs when the clock struck midnight and the New Year 2022 began.  More importantly, valuation metrics – such as the CAPE ratio and the Buffett Indicator – were at extreme all-time highs.

At the same time, as the year started, inflation was heating up.  Soon the Fed would be pivoting to interest rate hikes and quantitative tightening.  It was not a matter of if there would be a panic, but when.

Stocks have been smoldering all year.  The obvious trigger is raging 40 year high consumer price inflation.  And now, for the first time in four decades, the Fed is faced with the unpleasant choice of risking hyperinflation or mega asset price deflation.

So far, the Fed has chosen the latter…to let it burn.

In truth, this really is the only sane choice the Fed has.  The economic and financial market fundamentals are the exact opposite from when Alan Greenspan first executed the “Greenspan put” following the 1987 Black Monday crash.

In 1987, interest rates, after peaking out in 1981, were still high.  The yield on the 10-Year Treasury note was about 9 percent.  There was plenty of room for borrowing costs to fall.  Moreover, consumer price inflation, after raging for the entire 1970s, was subsiding.

But now the situation is dramatically different…

Today, with interest rates well behind the consumer price inflation curve, the “Fed put” – that is, cutting interest rates and blasting liquidity via quantitative easing to elevate the floor under how far the stock market falls – cannot be exercised without further inflating consumer prices.

To the contrary, the Fed must contain inflation before it puts a floor under the stock market and prints money to stimulate the economy.  It can’t do both at the same time.

And any path that involves juicing the stock market or stimulating the economy before inflation is snuffed out would ensure that inflation only rages higher.

This week, following the June FOMC meeting,  the Fed hiked the federal funds rate 75 basis points to a range of 1.50 to 1.75 percent.  Consumer price inflation, as measured by the consumer price index, is officially 8.6 percent – in reality it’s over 16 percent.

A Fed funds rate of 1.75 percent won’t do squat to quash consumer price inflation.  But in a bear market, following an everything bubble where financial assets had been leveraged beyond all insanity as a result of decades of reckless monetary policy, the absence of the “Fed put” can only mean one thing…

Financial markets are presently on fire.  And all the authorities can do is stand aside and let it burn.  What to make of it?

Mayhem, like brutal bear markets and inner city riots, are facts of life.  We’ll all get caught up in one here or there in our lifetimes.  The challenge is to make it through with as little damage as possible.

When much of the “looter’s playground” was destroyed during the Watts riots in 1965, Rodia’s towers were left unharmed.  Even the most disenfranchised brick throwing pyromaniac knew there was something of value there.  Something that should be preserved for the long haul.

Gold, silver, long term food storage and other tangible means for wealth preservation are looking good at the moment.  Stocks and bonds, like the buildings in Watts, are burning to the ground.

[Editor’s note: Don’t let the stock market meltdown destroy everything you’ve worked so hard for.  With inflation burning up your life savings it’s time to take the financial fire escape.  For this reason, I’ve dedicated the past 6-months to researching and identifying simple, practical steps everyday Americans can take to protect their wealth and financial privacy.  The findings of my work are documented in the Financial First Aid Kit.  If you’d like to find out more about this important and unique publication, and how to acquire a copy, stop by here today!]