Will Larry Summers Save the World Again? 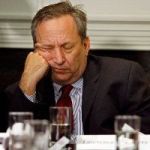 Modern macroeconomics is a boring and dreary trade.  The monthly report outs on GDP, unemployment, inflation, and other data aggregates, are a dull waste of time.  What decisions could you possibly make to improve your lot in life from these data reports?

Should you buy more toothpaste because the CPI is rising at a 5 percent annual rate?  Should you risk a career change when the unemployment rate is over 10 percent?  Should you buy an S&P 500 index fund because GDP growth is booming?

Economic reports are mostly useless for making intelligent decisions.  Yet these reports provide government central planners a steadfast reason to exist.  That is, to intervene in the economy to improve the data.

The goal for the planners is to get the reports to show numbers to their liking.  This generally includes moderate growth, low inflation, and low unemployment.  Years ago Alan Greenspan called this delightful combination a Goldilocks economy.

Reality, however, is often far different than what the official numbers say.  What’s more, government bean counters work over time to fabricate the data to support the official story.

Still, anyone with at least a passing interest can readily tell the numbers don’t add up.  That it’s mere government propaganda.  And when reality drifts too far off plot…things can become remarkably amusing.

Several months ago, for example, the Federal Reserve said it would keep the federal funds rate pinned near zero through 2023.  But consumer price inflation, fueled by radical amounts of fiscal and monetary stimulus, has now become too blatant to ignore.  Interest rates will need to rise long before the end of 2023.

So the official story must be rewritten.  On Sunday, with pen in hand, Treasury Secretary Janet Yellen told Bloomberg:

“If we ended up with a slightly higher interest rate environment it would actually be a plus for society’s point of view and the Fed’s point of view.”

How Yellen knows society’s point of view is a mystery.  But as the official story diverges from reality, central planner has-beens come out of the woodwork to cannibalize their own kind.

One of the more tedious drivellers of popular economic thought is former Treasury Secretary and legend in his own mind Larry Summers.  He’s smarter than you and he’ll make sure you know it.

Back in 1999, according to TIME, Summers, along with Alan Greenspan and Robert Rubin, saved the world.  That was before he had a hand in delivering a $1.8 billion loss to Harvard University.

Memories, however, are short.  Since 2017 Summers has been sequestered from public life in the ivory tower of Harvard academia.  He’s recently grown bored.

You see, Summers has always fancied himself the next Fed Chair.  Yet three Fed Chairs later, he’s still waiting.  In fact, for two decades he’s patiently waited for his big moment to shine…to step forward and deliver another round of salvation.

“These are the least responsible fiscal macroeconomic policies we’ve had for the last 40 years.”

Last week TIME published an interview with Summers where he further criticized Biden’s economic policies.  Namely, that there’s been too much stimulus…and that controlling inflation by raising interest rates will bring a costly recession.  Summers also delivered an unsolicited word of caution to his Democrat cohorts:

Will Larry Summers Save the World Again?

Fed Chair Jay Powell’s term will end in early 2022.  If consumer prices continue to rise the way they are it is unlikely he’ll be renominated.   But regardless of who comes next, Summers or someone else, the damage has been done.

We’ve already entered what will be a decade – or two – of consumer price inflation chaos.  For wage earners, savers, and retirees this will translate into a pronounced loss of purchasing power.  Public services will cost more and will provide less.  Infrastructure will further decay into disrepair.

Decades of self-serving politicians, financing  promises of something for nothing with the Fed’s printing press money are what got us into this mess.  Debts, deficits, and dependents have piled up like homeless encampments along Los Angeles bridge abutments.   No simple policy adjustment or legal action can magically make all these mistakes disappear.

Sound money, and the just discipline that comes with it, would have prevented this madness to begin with.  At this point, mass bankruptcy, liquidation, failed pensions, extended pain and misery, personal responsibility, and a return to honest living will be needed to clean up this mess.  This will also serve to clear much of the bloat out of government.

Surely, Summers knows this.  And he clearly knows what’s coming.  So why would he be posturing for a Fed nomination when it’s probable the next Fed Chair will be called upon to jack up interest rates and crash financial markets and the economy?

Larry Legend is human.  He’s prone to ego inflation, flattery, adulation and the longing to – once again – save the world.

No doubt, he’s eager to step forward and make a mess of things.  If he’s lucky, he’ll get passed over for Fed Chair for a fourth time.

Return from Will Larry Summers Save the World Again? to Economic Prism

3 Responses to Will Larry Summers Save the World Again?