Maxine Waters Drops the Hammer on Powell and Mnuchin 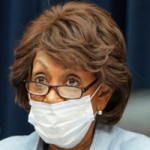 The days were indeed uncaring during the roll out of the CARES Act.  Lockdown orders.  Business closures.  Mass unemployment.  Daily riots.

These disorders are extensive and lasting.  They’re much greater than a $2.2 trillion economic stimulus bill.  But doing something is better than doing nothing, right?  An economic downturn should always be combated with legislation and a massive helicopter drop of fake money, shouldn’t it?

The popular account from leading economists and politicians is that without the CARES Act, everything would be much worse.  Therefore, they reason, another stimulus bill is needed.

What we do know is that what should have happened, didn’t.  An abrupt purge of bad debt was suspended.  We also know that we’ll be living with a myriad of CARES Act side effects, including a debt encumbered economy, for decades to come.

Americans are well in agreement on the second point.  They want more stimulus and they want it bad.  In fact, according to a poll by the Financial Times, 90 percent of Americans want Congress to pass a new stimulus bill.

Use It Or Lose It

How many stimulus bills will it take?  And how will we know if they’re working?  What if a sequence of stimulus bills causes more harm than good?  What if more stimulus further mires the economy in the quag?

These are the questions no one is asking.  For the answers to these questions present a reality that would rather be ignored.  That today’s symbiotic fiscal and monetary policies are destroying working Americans.  That this brand of central planning has failed.

But who wants to look at the evidence and face the facts?  Americans want more stimulus.  So why not give it to them?

Mark Cuban, the billionaire owner of the Dallas Mavericks, wants every household in America to receive a $1,000 stimulus check every two weeks for the next two months.  However, Cuban has a catch: use it or lose it.  Families would have to spend each check within 10 days or they lose the money.

Is this crackpot idea really the solution?  Or is it more of the problem?

With a little luck Congress will remain deadlocked and no further stimulus bills will be passed.  Maybe then the necessary debt purge can happen.  Corporate zombies can be wiped out.  And enterprising people can pick up the pieces and rebuild the economy free of the encumbrances crushing of debt.  Only then, will real economic growth return.

Of course, this approach means millions of Americans will have to kiss their pensions and Social Security checks goodbye.  It means cushy corporate jobs for companies like Boeing will disappear.

Obviously, this approach is not politically acceptable.  So a new stimulus bill will arrive just in the nick of time.  The inevitable will be suspended once again.  And things will become more intolerable for working Americans.

But in the interim, the political grandstanding is rather rich…

Maxine Waters Drops the Hammer on Powell and Mnuchin

This week Federal Reserve Chairman Jay Powell and U.S. Secretary of the Treasury Steven Mnuchin were called upon by the House Financial Services Committee to provide answers.  Somehow, their efforts to deliver upon the directive of the CARES Act did not live up to certain expectations.  Magic wands were waved.  Yet they only made asset holders richer.

On Tuesday, while donning a blue surgical face mask, and from behind a committee desk stocked with copious amounts of hand sanitizer, House Financial Services Chair Maxine Waters scolded Powell and Mnuchin.

…and Waters looked squarely at Powell and Mnuchin.  Then, after hesitating for dramatic impact, she dropped the hammer on them:

“This pandemic response has fallen badly short. … Your work to address this crisis doesn’t stop when the stock market recovers from its losses.  Your mandate is to help hardworking individuals and families who are suffering.”

Yet the hammer drop was an utter miss.

There are certain things Powell and Mnuchin cannot publicly admit.  So, in the spirit of community service, we extend the following clarification for Waters.

The Fed can create credit out of thin air and buy Treasury notes.  The Treasury can then use this printing press money to prop up failing businesses and mail out token stimulus checks.  But the Fed and the Treasury cannot bailout the entire economy, especially an economy under government lockdown orders, without destroying the currency.

Certainly, Powell and Mnuchin, under orders from Congress, can push stimulus into the economy.  And when Congress passes the next stimulus bill, they most certainly will.  They’ll bump elbows and crank up the presses for another round of money printer go BRRR.

The results, no doubt, will be equally lacking.  Save adding another several trillion dollars to the debt, all the Fed and Treasury will have to show for it is a flailing economy.  And Waters, the Chair of the House Financial Services Committee, will be doubly flummoxed.

Who knows?  Maybe the third stimulus bill will be the charm.  Or the fourth.  Or the fifth.  Alas, we’ll soon find out.