“In America Money Does Grow on Trees” 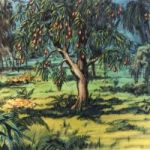 This week provided additional confirmation that America is fully committed to a program of currency destruction.  Decades of terminal intelligence have gotten us to this special place.  We’ll have more on this in a moment.  But first some words on being fully committed.

We’ve never gutted a hog.  But we hear it’s a bloody mess.  The volume of blood that gushes out – as in, ‘bleeding like a stuck pig’ – is profuse.

Contemplating a bacon and egg breakfast plate reveals two types of commitment.  That of the chicken.  And that of the pig.  You may know this allegory.  The chicken’s involved in providing for the breakfast.  It provides the eggs.  But the pig’s fully committed to it.  For the pig must perish to provide the bacon.

America is presently bleeding like a stuck pig.  Public and private debts are hemorrhaging a bloody mess.  For example, the budget deficit for fiscal year 2020, which concluded on September 30, was $3.3 trillion.  By this, the federal government spent double what it generated via tax receipts and other confiscatory measures.  And the federal debt held by the public is now over 100 percent of GDP.

There’s no way the debt will be honestly paid.  It’s mathematically impossible.  Nor will it be paid through an honest default.  That’s politically unacceptable.

The debt, however, will be paid dishonestly.  It will be paid through dollar debasement.  America is fully committed to this.  Here’s why…

Tuesday’s presidential debate has been called many things.  Most descriptions have cast it in a negative light.  Some political pundits used French to describe, in colorful terms, what type of show it was.

Here at the Economic Prism we offer a different assessment.  Namely, we found the presidential debate to be invigorating.  Like a New Year’s Day polar bear plunge, or a predawn distance jog, it was so painful that it was enjoyable.

President Trump’s grumpy bombast and bluster.  Biden’s scratching attempt to overcome his slide toward senility.  Utter disregard for facts.  And Chris Wallace, once again, striving, yet failing, to be Mike Wallace.

It was the sort of spectacle that demonstrates public degradation is integral to democratic government.  To be president, you must simultaneously sell your soul and roll around in the gutter.  For this reason, we give the debate a five star seal of approval.  However, the debate also offered another critical insight…

Not from Trump.  Not from Biden.  Not even from Wallace the Younger.  What Gives?  Where’s the opposition?

The real issue at hand – the one omitted from debate – is the present crisis brought on by 50 years of relentless debt accumulation.  Day after day, week after week, month after month, year after year, the federal government has spent more than it takes in.  Now the debt has piled up past the point of no return; there’s no longer an expedient way to reverse course.

“In America Money Does Grow on Trees”

The U.S. government, and by extension the American people, are fully committed to a program of currency debasement to inflate away the debt problem.  They believe executing an implicit default via inflation is the easier and softer way.

Intelligent minds, from John Law to Charles Ponzi to Bernie Madoff, from John Maynard Keynes to Milton Friedman to Ben S. Bernanke, from Benjamin Strong to Alan Greenspan to Jerome Powell, and everyone in between, have promised something for nothing.  They’ve put their intelligent minds to the task…

…all so governments, and individuals, can spend well above what they can afford, and then welsh on the debt without consequences.  The ultimate gift of this intelligence is terminal.

But why stop now?  Americans, like a pig supplying bacon, are fully committed.

The hottest incarnation of terminal intelligence is Modern Monetary Theory (MMT).  According to its purveyors, the USA can print all the money it needs to amplify the economy – debts and deficits be damned.

MMT, no doubt, is a system of big government statists.  A system where governments can hatch boondoggles without limits.  The whole theory, or lack thereof, is absurd.  But a growing base of supporters find it alluring.

The latest MMT messiah, Stephanie Kelton, has a new book.  It’s called, “The Deficit Myth: Modern Monetary Theory and the Birth of the People’s Economy,” and it’s getting rave reviews from unlikely places.  Upon reading the book, gangasta rap pioneer, Ice Cube, for example, tweeted the following means of salvation:

“America loves to cry broke.  But in America money does grow on trees.”

You can already see what’s coming…

When financial markets crack, and the economy collapses, and the populace pleads for someone to “do something,” the President and Congress will oblige with full commitment.  MMT – or QE for the people – will be granted with money from nothing.  Debts will be paid in full.  And like the pig, the dollar will perish.

Enjoy the bacon while it lasts.

19 Responses to “In America Money Does Grow on Trees”