Facing Down America’s Myths and Legends 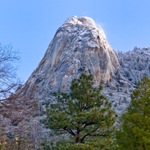 [Editor’s Note: We are social distancing from a remote mountain cabin in the shadow of Tahquitz Peak.  The secluded locale first inspired today’s Economic Prism, which was originally published on March 30, 2018, as Searching for Tahquitz.  There are ample insights to America’s present war on coronavirus found within.  So we’re dusting it off and republishing it.  Enjoy!]

Myths and Legends in America

Each generation is disposed to its own unique myths and legends.  Perhaps an absence of prior experience is what compels the younger generation to pick up the torch of popular delusion, regardless of whether it’s pure madness.  The older generation, on the other hand, may have garnered false expectations through a lifetime spent living in a world that no longer exists.

“Myths and legends die hard in America,” remarked Hunter S. Thompson in The Great Shark Hunt nearly 40 years ago.  No doubt, Thompson’s insight holds true today.  There is an abundance of myths and legends in America today… all bound for a hard death.  A partial listing includes:

The myth that U.S. Treasuries are the safest – default-free – investment in the world.  The legend of American exceptionalism.  The myth that everyone can live off the expense of their neighbors.  The legend that it is the President who leads the country.  The myth that packaging up a sausage of prime and subprime loans into a collateralized debt obligation and rating it triple-A somehow vanishes risk.  And so on, and so on, including…

Of course, myths and legends are not new or unique to the American experience.  People in these lands have held hands and lost their minds in unison for several millennia.  In fact, pre-Columbian America was also burdened with its own myths and legends.

According to a Cahuilla Native American legend, Southern California’s San Jacinto Mountains are home to an evil spirit known as Tahquitz.  From what we’ve pieced together, many moons ago, Mukat, the creator of all things, created Tahquitz and made him the first shaman.  At some point after that, Tahquitz became the guardian spirit of all shamans.

At first, Tahquitz used this power to do good.  But for reasons unclear, he began using his power to harm the Cahuilla people.  So the Cahuilla became angry and banished Tahquitz to a cave below a towering rock in the San Jacinto Mountains that is now known as Tahquitz Peak.

We tell this legend, as the ancients did, with purpose.  Today, we greet you from near the face of Tahquitz Peak, which stretches up to nearly 9,000 feet above mean sea level.  What we’re doing up here is quite simple.  We’re searching for answers – and a glimpse of a large, green fireball – on your behalf.

Up here, in the mountain valley below Tahquitz Peak, the early spring twilight lingers a little longer.  The evening sunshine bends through the tall, shady pines and sweet, vanilla-smelling cedars, basking on the splendid highland village of Idyllwild.  We breathe deeply and exhale gradually.  Time slows to the soft rhythm of Strawberry Creek as it meanders through town.

From this vantage point – a rare escape from the frenetic Los Angeles Basin – not only do we get fresh oxygen… we get a fresh perspective.  The spirit of the San Jacinto Mountains is ominously lucid: “Change is in the air,” warns Saint Jack.

But the change Saint Jack warns of is not a change motivated by rational choice.  Rather, it’s a change being forced by a century of dissolute decisions.  These decisions have stacked up beyond the point of deliberate solutions.

America’s myths and legends have placed it at great odds with the natural and political worlds.  Unfavorable realities are revealed each and every day.  Yet the more they’re revealed, the more destructive the psychosis that originates from D.C. grows… and the more it spreads across the land.

For example, as the mathematics of debt become ever more insurmountable, increases in public and private debt levels accelerate.  As the American military becomes more and more overextended, with around 800 military bases in 80 countries across the globe, the drums beat louder for an epic, World War III-type military misadventure.

What sort of nation so readily aligns itself to the zealous pursuit of state-sponsored collapse?  We presume the cessation of the great giant pickle America presently finds itself in will be disparaging.  The aftermath will be equally dreadful.

We kicked a few rocks.  We put our ears to the ground.  We looked.  We listened.  Saint Jack’s warning was more than enough.  Still, a sign from Tahquitz was what we were really searching for.

To our disappointment, no rumblings emanated up from deep within the mountain.  And when the sun slipped behind the high-altitude horizon and the stars twinkled bright in the cool night air, another disappointment befell us.  We squinted our eyes.  We waited with patience and good intentions.  Yet, no giant, green fireball shot across the sky.

Could it be that the legend of Tahquitz, and the myth that its evil spirit resides deep within the San Jacinto Mountains, is all bogus after all?

Maybe so.  But we’re certain that, at one point, the world that birthed it was as real as a credit default swap circa 2008.  Then – poof! – just like that, it was gone.