Facing Down a Wrath of Biblical Proportions 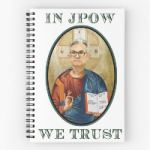 “The LORD sends poverty and wealth; he humbles and he exalts.” – 1 Samuel 2:7

An enterprising entrepreneur did a comedic graphic of Federal Reserve Chairman Jerome Powell captioned: “IN JPOW WE TRUST.”

You may have seen it.

The image shows Powell flamboyantly wearing a preacher’s robe and making an esoteric hand gesture with his right hand.  His face is grimacing like he’s passing a kidney stone.

His left hand holds up what appears to be an outwardly facing bible.  The scriptures are sparse and hardly legible.  But if you zoom in you can make out important prophecies like, “STOCKS ONLY GO UP,” “RECESSION CANCELLED,” “MONEY PRINTER GOES BRRRRRRRR.”

An American dialect of French is also used in several instances to express what happens to market bears and those who short stocks.  It’s the sort of thing best reserved for locker room talk.

The designer, who goes by nobiggydiggy, must have created this in the risk-free days before March of this year.  Back when the federal funds rate was firmly pressed to zero, as it had been for two years.

That was when Powell was preaching from the New Testament.  He was delivering a monetary policy of compassion and forgiveness.

Since then, guided by the wrath of inflation, Powell has turned to the Old Testament.  He’s been hiking the federal funds rate and delivering a monetary policy of fire and brimstone.  Scriptures like, “CRASH THE MARKET,” “BRING ON THE DEPRESSION,” “BORROWERS MUST PAY,” are more like it.

In the dance between life and art, the odd spectacle of a central banker using rapturous, holy rolling religion to deliver monetary policy announcements is not far from reality.  This week, for example, millions of grown men and women tuned into hear Powell preach the sacred truth.

Trillions of dollars were at stake when the two-day FOMC meeting adjourned on Wednesday.  The balance of it was poised to pivot one way or another, to the pull of how many basis points Powell commanded.

As expected, the Fed hiked the federal funds rate 75 basis points, to a range of 3.00 to 3.25 percent.  The Fed also telegraphed that it would be hiking above 4.25 percent by the end of the year.

For perspective, the federal funds rate hasn’t been above 3.25 percent since January 2008.  That’s over 14 years ago.  Or about 6-months after the first iPhone hit the market.

Following the FOMC statement, Wall Street let out a collective primal scream.  The Dow Jones Industrial Average (DJIA) moved with an initial down then up bipolar response.   After that, it crashed to the closing bell for a loss of 522 points.

The most beautiful moment came following JPOW’s press conference.  That’s when Senator Elizabeth Warren – the shrew with a plan for everything – took to twitter:

“I’ve been warning that Chair Powell’s Fed would throw millions of Americans out of work – and I fear he’s already on the path to doing so.”

The outlook is much, much worse than Warren will let on.  She knows decades of profligate government spending programs are nearing the end of the road.  She want’s Powell and the Fed to take the fall when it all blows up by the end of the year.

To clarify, the economy and financial markets are currently being devastated by the disagreeable combination of inflating consumer prices and deflating asset prices.  Both are the makings of central planners – including both Warren and Powell.

Stocks, on the other hand, are deflating.  The DJIA is down over 17 percent year-to-date.  The NASDAQ is down over 30 percent.

As interest rates rise, in a desperate effort to contain rampant consumer price inflation, borrowing becomes more expensive.  The interest rate on the 30-year mortgage is now 6.29 percent.  One year ago, it was just 2.88 percent.  In other words, the borrowing costs for buying a home have more than doubled.

As mortgage rates rise, house prices have nowhere to go but down.  Houses across the country, priced at levels that would have sold 6 months ago, sit on the market…unsold after two to three months.  Several rounds of price reductions aren’t cutting it.  Much more will be needed to clear the market.

Indeed, asset prices are deflating while consumer prices are inflating.

This is the exact opposite of the world that everyone knew and loved over the last 40 years.  Where consumer prices for imported goods were moderate and stock, bond and real estate prices boomed.  Where homeowners could refinance every several years at ever lower rates.

Yet the inflation was there all along.

Services that couldn’t be imported, like medical care and college tuition, inflated beyond comprehension.  The CPI masked these rising prices because of the flood of low cost, cheaply made imported goods.

Facing Down a Wrath of Biblical Proportions

The insane amount of money creation to combat the scourge of government mandated lockdowns has proved too much to handle.  Between February 2020 and April 2022, the Fed’s balance sheet doubled from $4.15 trillion to $8.96 trillion.  It’s no mystery why consumer price inflation is raging.

Now the Fed is tightening back.  And financial markets can’t handle it.

In addition to rate hikes, the Fed has reduced its balance sheet ever so slightly to $8.32 trillion.  There’s still a long way to go to bring the balance sheet down to the realm of normal – whatever that is.

In the interim, there’s loads of inflation to contend with.  David Haggith, publisher and editor-in-chief of The Great Recession Blog recently clarified what we’re up against:

“Those of us who lived through the seventies’ battle with inflation, remember that it is not easy to knock inflation back down!  It’s like playing whack-a-mole.  So, we know no one should have been surprised, in the least, to find out inflation’s fever was holding on pretty tight to the top of the mercury, in spite of all the Fed’s cold deluges of interest-rate hikes and QT.  It took a few years to get the fever fully back under control with extreme interest rates back then.  It won’t take that much ice in interest rates now because the economy will completely disintegrate if we even get to rates HALF as great; but that’s the point — economic disintegration is what the Fed is aiming for without realizing it.”

What to make of it?

The U.S. economy’s already in a recession.  Nonetheless, consumer price inflation has hardly diminished.  Even if the CPI were to be cut in half, it would still be double the Fed’s preferred rate.

So, the Fed will push rates higher in a desperate attempt to clean up its wreckage from the past.  And the economy will disintegrate.

All the while, Warren and other political populists will spew nonsense to deflect responsibility for the mess they’ve created.

The depth and duration of the destruction is unknown.  Still, we’re fairly certain this is more than your garden variety downturn…

This is the big one we’re all facing.  A wrath of biblical proportions.

[Editor’s note: Years of radical money printing have set American investors up for slaughter.  Discover how to protect your wealth and financial privacy, using the Financial First Aid Kit.]

30 Responses to Facing Down a Wrath of Biblical Proportions