Winnie the Pooh’s Adventures In Fairyland 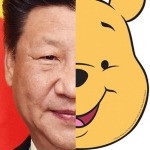 Up until the Evergrande Group began stiffing creditors, Xi Jinping had it made.  But being a communist dictator is serious business.  And when the Ponzi finance structure underlying your country’s second largest property developer begins cascading down it’s no laughing matter.

One of the gravest moments for any communist dictator is when his nation’s fortunes deviate from the course of the five year plans put in place to rule over it.  Playing god to 1.4 billion people only halfway works, so long as the people’s reality somewhat parallels the official communist party line.  Otherwise, force and fear are required to maintain the lies.

“A man’s heart deviseth his way: but the Lord directeth his steps,” noted King Solomon (Proverbs 16:9).  The good Lord, in heaven above and on the earth beneath, has a keen sense of humor; particularly, when serving up a slice of humble pie.

Xi Jinping, through happy accident, timed his entry into the world stage most perfectly.  A 20 year economic boom had taken the People’s Republic of China to a new place of global prominence.  Yet rather than basking in the glory of his predecessors successes, Xi took to flexing his muscles abroad, and censoring and surveilling his citizens at home.

Evergrande is one of many leveraged developers in China.  But it happens to be the most overstretched, and the first to have its cash flow come up short of its debt obligations.  More developers will follow.

There are plenty of reasons why Xi would want to reign in over-leveraged developers.  The industry has been out of control for many years; the uninhabited ghost cities demonstrate this.  But we think Xi’s reasons have to do much more with vanity than a renewed drive for common prosperity.  Here’s why…

Xi, through no fault of his own, bears an uncanny resemblance to Winnie the Pooh.  Several years ago clever bloggers began posting memes of the plump, affable cartoon character with comparisons to Xi.  The episode was quite hilarious.  But not for the sullen central government…

The CCP responded by blocking all references to Winnie the Pooh inside the Great Firewall of China.  China’s censors will not tolerate ridicule of the nation’s Supreme Leader.  Xi is not to be mocked.  He makes no mistakes.  He must be adored by the population.  He is above question.

What good is a country if the people can’t make fun of its leader?

As far as we can tell, it’s not a country worth living in.  Moreover, when rich guys in a communist country become more famous than the Supreme Leader they must be taken down a notch – or two.

Take Jack Ma, for instance.  The eccentric co-founder and former executive chairman of Alibaba harnessed the growth of the internet to become the country’s richest man.  Yet that was before he criticized China’s regulators, and thus suffered the abrupt cancellation of affiliate Ant Group’s much anticipated IPO.  These days Ma is rarely seen in public.

Now Hui Ka Yan, founder and chairman of Evergrande, and until recently the country’s second richest man, has also ran afoul of the CCP.  Hui, more than anyone else, was a benefactor of policies out of Beijing.

Predictably, property prices bubbled up across the country…from coastal megacities to interior regional centers.  Real estate development became a near guaranteed path to wealth and riches.  The bigger the developer, and the more land it had as collateral, the more it could borrow.  With low interest rates the cycle was self-reinforcing so long as property prices only went up.

“Everything for me and Evergrande is given by the party, the state, and society,” said Hui in a 2018 speech.

Perhaps Hui should have also thanked plentiful, cheap credit for his fortunes.

Of course, the flipside of credit is debt.  And Evergrande now appears to be unable to make a succession of upcoming coupon payments.  Alas, this is happening after it disfigured the countryside with some of the more dreadful structures to ever be imagined…

Winnie the Pooh’s Adventures in Fairyland

Bubble-ism – or communism with Chinese characteristics – has accomplished the spectacular.  Supplied with cheap credit and the will of the CCP, Evergrande and other property developers took to outdoing each other in strange and tasteless ways.

The artificial islands of Hainan, the “Hawaii of China”, in southern China, became ground zero for Chinese bubble-ism.  What follows are several of the highlights…

There’s the huge curved structures of Phoenix Island that light up in red.  Ma Yansong, the founder and principal partner at Mad architects, explained the development’s philosophy:

“It is an island in the sea. Architecture on the island should look like it grew out of the sea.  They should be curvy, just like coral or sea star.  It feels like they are a group when they are pieced together.”

The master plan for Ocean Flower Island Fairyland includes a 12-acre water park, hotels, museums, an amphitheater, an arboretum, cinemas, parks, shops, and an opera.  The reported estimated cost pencils out to a round 100 billion yuan or $15 billion.  By our back of the napkin calculation, the final cost will be double, or possible triple, the estimated cost.

According to the group’s most recent annual report, it started taking customers on a trial basis earlier this year, with plans for a full opening “at the end of 2021.”  From what we can tell, Evergrande will not meet this deadline.

What’s more, before Evergrande ran out of money, it intended to build 15 such Fairyland parks in China.  Going broke, no doubt, is the best thing that ever happened to Evergrande and China.  It prevents the further disfiguring of the landscape with madness.

Naturally, this is where one chapter of the story ends and another begins…

Xi may think he can yank the rug out from under Chinese developers after several decades of stimulating their excess without triggering a financial and economic disaster.  But he can’t compel real estate prices to only go up.

25 Responses to Winnie the Pooh’s Adventures In Fairyland