Who’s That Ringing the Korean Bell of Friendship? 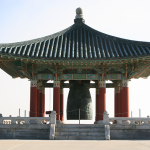 Do citizens of the United States trust their government will do what’s right?  It depends who you ask.

By and large, the esteem the American populace holds its government in is likely a small fraction of what it was roughly 65 years ago.  That was when Lieutenant General William Kelly Harrison Jr. signed the Korean Armistice Agreement.  Certainly, in days gone by representatives of other nations held the U.S. government in higher regard.

Several weeks ago, President Donald Trump decided to pull the U.S. out of the Iran nuclear deal and reimpose sanctions on Iran.  This action, and its implications for various European companies with business interests in Iran, stuck like a chicken bone in the craw of European Council President Donald Tusk.  “With friends like that who needs enemies,” tweeted Tusk.

Indeed, President Trump is an erratic fellow.  He’s a master table pounder.  He goes about his business with passion and the appearance of purpose.  His emotions run hot.  Yet, he has ice in his veins.

Moreover, his strategy for making America great again is unclear.  One day he starts a trade war.  The next day he lends a helping hand to Chinese telecom company ZTE.

If you recall, ZTE’s the company that was busted for illegally exporting U.S. technology to Iran and North Korea in violation of trade sanctions.  Are Trump’s actions all part of his art of the deal?  Or are they the ambiguities of a lunatic?

Whatever they may be, Trump better have his act together.  In less than a fortnight, he’ll begin negotiating what may be the most important deal of his life…sparking up a new bromance with North Korean leader Kim Jong-un.

What follows is a scratch for clarity…

The Korean Bell of Friendship

Angel’s Gate Park sits high upon the bluffs at the southern tip of the Palos Verdes Peninsula, in the San Pedro district of Los Angeles.  Winds gusts off the Pacific Ocean from three directions, explode up the face of the sea cliffs, and wildly swirl about the park’s crest.

Catalina Island rises from the waters like a mountain berg to the south.  Peering over the bluff, past Point Fermin Lighthouse, the vertical expanse of the island appears to be just a short swim away.  Lastly, to the north are the seedy streets of San Pedro; the former stomping grounds of the late poet Charles Bukowski.

At the center of Angel’s Gate Park, just south of the youth hostel, sits the Korean Bell of Friendship.  The massive bronze bell is positioned over a stone pavilion.  The imposing pyramidal roof structure, supported by twelve columns, is etched with ornate Korean zodiac animals and vibrant color patterns.

Immediately, beneath the ground where the bell sits are the old abandoned World War I bunkers of Fort MacArthur, named after Lieutenant General Arthur MacArthur – father of World War II General Douglas MacArthur.  Several remnants of massive gun battery emplacements are located immediately adjacent.  This site falls within the area of The Great Los Angeles Air Raid of 1942, where Los Angeles fell under – real or imagined? – attack from a squadron of Japanese bombers.

Apparently, the Korean Bell of Friendship was given to the U.S. government to celebrate the bicentennial of the U.S. and to symbolize friendship between the two countries.  A big part of that friendship has been the protection the U.S. has afforded South Korea over the decades.  South Korea, in turn, has flourished, while North Korea has flagged.

Who’s That Ringing the Korean Bell of Friendship?

No doubt, ‘Rocket Man’ Kim Jong-un is a madman.  And a madman with nuclear missiles is trouble in the making.  But so is U.S. airmen overseeing ICBMs while on hallucinogenic drugs.  Either one could unleash a paranoid fury of barbarism on the world.

Over the Memorial Day weekend a delightful picture of Kim Jong-un and South Korean President Moon Jae-in cascaded across the World Wide Web.  Following a surprise summit at the truce village of Panmunjom, the two partook in what The Telegraph has called, “a triple hug.”

Could it be that Kim Jong-un has come to his senses?  Or is he positioning for his own art of the deal?  His rapid change of heart seems rather improbable.

The once off, June 12 meeting in Singapore between President Trump and Kim Jong-un is currently back on.  Maybe this will be the spark of a new bromance.

Who knows?  Unlike Moon Jae-in, Trump’s not much of a hugger.  But he’s always good for a lengthy grip and grin.

For better or for worse, the world’s a vastly different place than it was when the Korean Armistice Agreement was signed on July 27, 1953.  The U.S. can no longer afford to hold the DMZ line.  Perhaps the time has come for America to close up shop and vacate its military operations on the Korean Peninsula.

Surely, China would like Washington out of its backyard.  Hence, via their pal Kim Jong-un, China rings the Korean Bell of Friendship.  What in the world will Trump do?

Return from Who’s That Ringing the Korean Bell of Friendship? to Economic Prism