Has Joe Biden Lost His Mind? 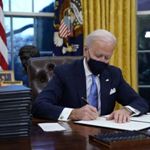 Are you an accidental dependent of Washington?  Many people are.  And many people don’t even realize it.

Systems of elaborate folly have been erected with the most impossible of promises.  That wealth can be created without production.  That stimmy checks can be paid without taxes.  That everyone can get free solar power at the expense of their neighbors.

Central to these promises are the central government and central planning authorities.  They promise ease and comfort and, in return, they make you a dependent.  They promise a secure retirement, and free drugs, while running a scheme that’s beyond Charles Ponzi’s wildest dreams.

Social Security, no doubt, is a tempting idea.  The government confiscates part of your paycheck every two weeks.  Then, in return, and after putting in 45 years, your retirement is subsidized.  You can enjoy your golden years in comfort.

According to Rachel Greszler, research fellow at the Heritage Foundation:

“[Social Security’s] America’s favorite entitlement program, and part of the reason it’s so popular is it’s not solvent.”

Indeed, the most popular programs are those that promise people they’ll get out more than they put in.  The promise is so appealing people trust that by hook or crook their government leaders will deliver.  Alas, those counting on Social Security may suffer a grave disappointment.

From the get go, it really didn’t take much abstract thinking to recognize that Social Security would eventually go broke.  Any honest assessment could discern it was doomed to fail.  All Ponzi schemes are.

In 1939, before the first check was ever cut, John T. Flynn predicted Social Security would be under water by 1970 and insolvent by 1980.  Despite being called a crank by the political elites of the day, Flynn was right.  In fact, without the Greenspan Commission and the Social Security Reform Act of 1983, Flynn’s prediction would have been off by merely three years.

But Greenspan didn’t solve the Social Security problem.  He merely extended it further into the future.  And in doing so he set up several generations of workers to be dependents…at the worst possible time.

Over an extended period, this divergence results in two dramatically different growth curves.  Government debt now dwarfs GDP by $9.2 trillion.  Do you think we’ll grow its way out of this?

But wait, it gets worse.  The divergence between GDP and government debt is a major problem.  Yet it ignores an even larger story.  Specifically, it ignores the story of unfunded liabilities…

Has Joe Biden Lost His Mind?

The current price tag for unfunded liabilities – for Social Security, Medicare (Parts A, B, and D), federal debt held by the public, and federal employee and veteran benefits – is $158.9 trillion.  Again, GDP’s just $18.6 trillion.  Anyone under 50 years old that’s depending on Social Security to supplement them in retirement is toast.  Many people older than 50 are also toast.

At this very moment, we’re living with several unfavorable gifts from our forbearers.  Namely, social safety nets constructed many decades ago that don’t pencil out.  These safety nets are now stretching and fraying at the seams, at the precise moment when tens of millions of Baby Boomers will rely on them most.

According to official estimated from the Social Security Administration, just 79 percent of promised benefits will be payable in 2035 due to depletion of its trust funds.  Yet even though everyone’s known Social Security was going bust, most people haven’t done a thing to prepare for it.  Instead they’ve buried their collective heads in the sand like an unassuming ostrich.

If you can believe it, three out of five families headed by a person age 65 or older have no money in retirement savings accounts.  The promise of Social Security misled them in damaging and irreversible ways.  Or did it?

President Biden is currently preoccupied with delivering the American people from the evils of COVID-19.  After that, he intends to save us from global warming.  But that’s not all…

“Under his [Biden’s] plan, eligible workers would get a guaranteed minimum benefit equal to at least 125 percent of the federal poverty level.  People who have received benefits for at least 20 years would get a 5 percent bump.  Widows and widowers would receive about 20 percent more per month.”

To pay for it, Biden proposes to soak the rich with additional Social Security payroll taxes on those earning $400,000 and up.  Regardless, these token promises amount to merely rearranging the deck chairs on the sinking Titanic.

Surely Biden doesn’t think Social Security can be reformed, does he?

Return from Joe Biden Lost His Mind? to Economic Prism

26 Responses to Has Joe Biden Lost His Mind?