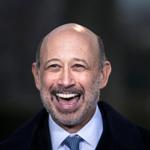 One and the Same

Today we step away from the economy and markets and endeavor down the path less traveled.  For fun and for free, we wade out into a smelly peat bog.  There we scratch away the surface muck in search of what lies below.

Our unwitting inspiration is none other than long time Goldman Sachs CEO Lloyd Blankfein.  The journey that follows was prompted by word he’s preparing to step down as CEO.  One account said this could happen by year’s end.  Indeed, times like these are times for honest reflection and celebration.

If you recall, in the fall of 2009, not long after warm rays of sunshine began smiling down upon this bull market, Goldman Sachs’ top man, Lloyd Blankfein had an epiphany.  The way he put it to The Times of London was that he’s just a banker doing “God’s work.”  At the time we weren’t sure what Blankfein was getting at.  Were you?

Perhaps he was elevating himself, and his firm’s business, to the noble and thankless cause of efficiently allocating capital to its highest and best use.  As best we can tell, Blankfein implied that this was, somehow, the work of God.  And by Blankfein’s rationale, the work of God and the work of Goldman are one and the same.

The Times of London may not have been convinced by Blankfein’s claim.  The article did clarify that Goldman Sachs “…makes money by charging hefty fees to the companies and clients it advises and whose assets it manages – typically 2-4 percent.  It also makes profits from trading using its own cash.”

For whatever reason, Blankfein omitted an important facet of his morality play.  Roughly one year prior, when the sky was falling during the darkest days of financial crisis, government benevolence, courtesy of the taxpayer – that’s you – had rescued Goldman and the other big banks via the AIG bailout.  Was this “God’s work” too?

Quite frankly, we don’t know.  We don’t pretend to know the will of God.  But as Ralph Waldo Emerson elucidated in the essay Nature, there’s a natural order to the world.

Following Emerson’s lead, we acknowledge that there are some simple facts of how the world works.  There can also be consequences for attempting to thwart them, or for simply getting in their way.  We may not like some of these facts.  But our opinion really doesn’t matter.

From a purely natural sense, Pi is an irrational number.  There’s no denying it.  Rounding it off after two decimal places doesn’t change the fact that the ratio of a circle’s circumference to its diameter cannot be expressed exactly as a fraction.  This is an apparent incongruency to the world and there’s nothing you or anyone else can do to change it.

There are also fundamental truths to the moral order of things.  You can’t always get what you want.  Deficits do matter.  Artificially suppressing the cost of money distorts an economy.  A fool and his money are soon parted.  Fire and gunpowder don’t sleep together.  What goes around comes around.

While we may not know the will of God, we think we may know what it isn’t.  The natural answer to the mortgage backed security crisis was outright bank failures.  A mass cascading spill over systemic bank panic should have swept across the land and wiped out all insolvent financial institutions.

Nature has no sympathy for the human construct of “too big to fail.”  What we mean is the tax payer bailout of the big banks was likely counter to God’s work.  Regardless of what Blankfein says, a business that keeps private profits while socializing its losses is profane.

The bailout of the U.S. financial system, by the Emergency Economic Stabilization Act of 2008, took place nearly a decade ago.  This is old news.  No one, save a small fringe of financial gadflies, still cares about this.  But that doesn’t mean it isn’t still important.

The bailout’s ramifications continue to be felt throughout financial markets and the economy.  Toxic mortgage backed securities still soil the Federal Reserve’s balance sheet.  In fact, part of the Fed’s quantitative tightening program involves gradually reducing its holdings of mortgage backed securities.  This, along with increases to the federal funds rate, could usher in the next recession.

Thus, given word of Blankfein’s approaching departure from Goldman Sachs we refuse to give him a free exit pass.  Because when the big bank bailout was being hatched, Blankein was in the middle of it, egging on Goldman cronies Hank Paulson and Neel Kashkari, and ensuring his bank’s access to a lifeline of taxpayer liquidity.  Then, following the bailout, and a great big bonus, he offered the following non-apology:

“Certainly, our industry is responsible for things.  We’re a leader in our industry, and we participated in things that were clearly wrong and we have reasons to regret and apologize for.”