Who Will Be President and Other Hunches for 2016 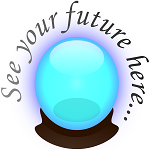 The New Year is here.  The slate’s been wiped clean.  New hopes.  New dreams.  They’re all accessible.  They’re all within reach.  No doubt, 2016 will be the year you get everything you deserve in life.  But what else will happen?

Today we squint our eyes and peer deep into the crystal ball.  There, at the center of the orbuculum’s refractive light, we scry visions of what’s to come in the year ahead.

Will stocks go up or down?  What about gold?  Are we destined for World War III?  Who will be the next President of the United States?

These are the questions – and more – we intend to answer.  Obviously, clairvoyance via crystal gazing is more art than science.  But so is taking a charted wave pattern and extending resistance and support lines out into the future.

Remember, past performance is no guarantee of future results.  Thus, we’re eschewing common forecasting techniques for a metaphysical approach.  But before we gaze into our trusty crystal ball and let it rip, several words of caution…

What we know is far less than what we don’t know.  Moreover, what we do know is a liability.  For it’s soiled by what Samuel Clemens once called ‘lies, damned lies, and statistics.’  It’s also sullied by our subjective objectivity.  In short, we know less than nothing.

Now, with that out of the way, we shall face our limitations.  What follows, for fun and for free, are several simple guesses for the year ahead…

To begin, extreme monetary intervention will continue.  You can count on that.  Central banks around the world will do whatever it takes – or die trying – to expand the money supply and increase credit growth.  Naturally, these policies promote extreme market pricing absurdities followed by massive price declines.

At this point we’re still in the extreme market pricing absurdities part of the cycle.  There’s no negating that we are heading for another massive 50 percent stock market shakeout like 2000 and 2008.  But who’s to say stock market prices won’t first become more extreme…and more absurd?

In this regard, under current conditions, the broad stock market is speculative.  Make sure you’re honest with yourself about this before buying stocks.  If you are clear about this fact, then go ahead and place some strategic bets.  But, when doing so, also consider the following…

Resist the urge to buy stocks, like utility or consumer staple stocks, purely for dividends.  The Fed is intent on pushing up interest rates.  As the 10-year Treasury approaches 3 percent, riskier dividend paying stocks, will be sold en masse.  Certainly, the Fed could reverse course at any time.  However, we believe they will push up rates until a crisis is triggered…even if a 2 percent federal funds rate is as far as they can go.

Conversely, if you want to speculate on rising interest rates, consider betting on banking sector stocks.  As the spread between what lenders pay to borrow money and how much interest they can charge when lending money to customers widens, the net interest income of banks will substantially grow.  Again, this is predicated on the Fed’s intent to push up interest rates and the extent to which financial markets allow them to.

Who Will Be President and Other Hunches for 2016

The coming year will be one of great tribulation.  As the global economy – including the U.S. economy – approaches recession, world leaders will seek to deflect blame from their own blunders.  They’ll search for a diversion to channel the frustrations of their populace towards.  They’ll stumble outward in quest for a greater purpose and meaning for their young and unemployed.

The fact of the matter is, global factions are on a collision course for war.  Today’s proxy war and blowback for ISIS duplicity in Syria will escalate.  Tensions in the Ukraine will fester.  The ongoing territorial dispute between China, Malaysia, Philippines, Taiwan, and Vietnam over the Spratly Islands in the South China Sea will intensify.  Ancient territorial disagreements between Japan and China over the Senkaku-Diaoyu Islands in the East China Sea will deepen.

Drum beating and chest pounding of world leaders will increase to deafening levels.  New myths will be concocted to garner public war support.  Alas, a major clash between rival powers will be underway by year’s end.

Despite personal reservations you may have about the warfare state, being pragmatic will have a payoff.  We must understand the world as it is, not as we’d like it to be.  Hence, speculating on defense sector stocks – like Lockheed Martin and Northrop Grumman – will prove to be a shrewd move in 2016.  Though, we’d prefer it weren’t.

With respect to gold, the Midas metal will take another year off.  The strong dollar and rising interest rates will stifle it, for now.  Nonetheless, the comparative value of gold, relative to stocks, bonds, or real estate, is considerably discounted.  This means it will be a fantastic year to accumulate and add to your physical gold hoard, while gold’s price spring further coils.  Five years from now you’ll be glad you did.

Lastly, and it pains us to say it, Hillary Clinton will be elected President in November.  We hope with all earnestness that our premonition’s wrong on this one.