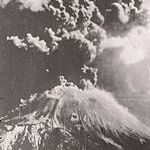 Everything was just the way it was supposed to be in Pompeii on August 24, 79 A.D.  The gods had bestowed wealth and abundance upon the inhabitants of this Roman trading town.  Things were near perfect.

The lucky residents of Pompeii lived in large homes with elegant courtyard gardens and all the modern conveniences.  Rooms were heated by hot air flowing through cavity walls and spaces under the floors.  Running water was provided to the city from a great reservoir and conveyed through underground pipelines to houses and public buildings.

Fresh fish from the Bay of Naples were readily available in the Macellum (great food market) and countless cauponae (small restaurants).  Entertainment was on hand at the large amphitheatre.  Life was agreeable, affable, and idyllic for all – and it was only getting better.  Everyone just knew it.  They could feel it.  They believed it.

By 79 A.D. Pompeii had experienced nearly uninterrupted advancement from its founding almost 700 years earlier.  That this would ever change was unthinkable.  On the morning of August 24th, who but a doomsayer would suggest there wouldn’t be another 700 years of progress?

Yet, just then, when things couldn’t have seemed more certain, Mount Vesuvius blew.  Nineteen hours later, where there had been life and a thriving civilization, there was silence for the next 1,669 years.

Viewing events through the lens of history and hindsight is unfair to its participants.  Their missteps are too obvious, their vanities are too abundant, and their inferiorities too absurd.  They appear to be mere imbeciles on parade.

Was George Armstrong Custer really just an arrogant Lieutenant Colonel who led his men to massacre at Little Bighorn?  Maybe.  Especially when Sitting Bull, Crazy Horse, and numbers over three times his cavalry appeared across the river.

Were George Donner and his brother Jacob naïve fools when they led their traveling party into the Sierra Nevada in late fall?  Perhaps.  Particularly when they resorted to munching on each other to survive the raging blizzard.

Still they were human just like we are human.  No smarter.  No dumber.  We’re not here to ridicule them; but rather, to learn from them.

In the case of Pompeii, the warning signs were evident to those who bothered to heed them.  Seventeen years before Mount Vesuvius erupted there was a massive earthquake that damaged many of the structures within the city.  Then, leading up to 79 A.D., frequent, but smaller quakes occurred.  Soon no one seemed to pay them any concern.

In the end, ignoring these warnings proved fatal.  Coincidentally, it was just one day after the Vulcanalia – the festival of the Roman god of fire – that Mount Vesuvius erupted.  A cloud of gas and ash spewed down on Pompeii, instantly killing its inhabitants and burying the city under 60 feet of ash and pumice.

“You could hear women lamenting, children crying, men shouting,” was the account by Pliny the Younger, 61 A.D – 112 A.D.  “There were some so afraid of death that they prayed for death.  Many raised their hands to the gods, and even more believed that there were no gods any longer and that this was one unending night for the world.”

This week it was reported that supervolcano Campi Flegrei, located just west of Naples, Italy, and not far from Mount Vesuvius, has reached critical stage.  An imminent eruption threatens 360,000 lives.  According to Dr. Christopher Kilburn of the University College London Hazard Centre:

“By studying how the ground is cracking and moving at Campi Flegrei, we think it may be approaching a critical stage where further unrest will increase the possibility of an eruption, and it’s imperative that the authorities are prepared for this.

“We don’t know when or if this long-term unrest will lead to an eruption, but Campi Flegrei is following a trend we’ve seen when testing our model on other volcanoes, including Rabaul in Papua New Guinea, El Hierro in the Canary Islands, and Soufriere Hills on Montserrat in the Caribbean.”

On Wednesday, another Mount Vesuvius of sorts released some warning ash into the atmosphere.  Specifically, U.S. stock markets let out an enormous belch.  At market close the DOW had dropped 1.78 percent, the S&P 500 1.82 percent, and the NASDAQ 2.57 percent.  What’s going on?

Quite frankly, no one knows.  Perhaps this is a small exhale before the next big inhale to DOW 30,000.  Or maybe it is danger rumblings of the next great big bear market purge.

Whatever you make of it, you’d be well advised to heed Wednesday’s warning.  In fact, if you bend your ear just right, you can hear the cries of the ancients from 79 A.D. Pompeii.  “Get out while you still can,” they shriek.  “This is your final chance!”

Return from Warnings from Mount Vesuvius to Economic Prism

11 Responses to Warnings from Mount Vesuvius