Listening to the Canary 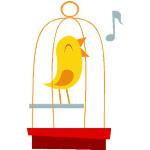 Listening to the Canary
By Terry Coxon, Senior Economist

During World War II, the British Royal Air Force (RAF) undertook a plan of misdirection to allow a squadron of bombers to approach an exceptionally valuable target in Europe undetected.  The target was so heavily guarded that destroying it would require more than the usual degree of surprise.

Although the RAF was equipped to jam the electronic detection of aircraft along the route to the target (a primitive forebear of radar was then in use), they feared that the jamming itself would alert the defending forces.  Their solution was to “train” the defending German personnel to believe something that wasn’t true.  The RAF had a great advantage in undertaking the training: The intended trainees were operating equipment that was novel and far from reliable; and those operators were trying to interpret signals without the help of direct observation, such as actually seeing what they were charged with detecting.

The training continued for nearly three months, and the German radar personnel interpreted the signals their equipment gave them in just the way the British intended. They concluded that their equipment operates poorly in the atmospheric conditions present at sunrise and that the problem grows as the season progresses.  That mistaken inference allowed an RAF squadron to fly unnoticed far enough into Europe to destroy the target.

People will get used to almost anything if it goes on for long enough.  And the getting-used-to-it process doesn’t take long at all if it’s something that people don’t understand well and that they can’t experience directly.  They hear about Quantitative Easing and money printing and government deficits, but they never see those things happening in plain view, unlike a car wreck or burnt toast, and they never feel it happening to themselves.

Fleeing the Ghost of the Dot-Com Bubble

QE has become just a story, and it’s been going on for so long that it has no scare value left. That’s why so few investors notice that the present situation of the US economy and world investment markets is beyond unusual.  The situation is weird, and dangerously so.  But we’ve all gotten used to it.

Here are the four main points of weirdness:

But again, there was a further consequence—the financial collapse that began in 2008. This time, the Federal Reserve stomped on the monetary accelerator with both feet, and the growth of the money supply hit a year-over-year rate of 21 percent.  It’s still growing rapidly, at an annual rate of 9 percent.

The flow of new money has been irrigating all financial markets.  In the US, stocks and bonds tremble at each hint the Fed is going to turn the faucet down just a little.  And it’s not just US markets that are affected.  When credit in the US is ultra-cheap, billions are borrowed here and invested elsewhere, all around the world, which pushes up investment prices almost everywhere.

Almost no one imagines that the current situation can continue indefinitely.  But is there a way for it to end nicely?  For most investors, the expectation (or perhaps just the hope) that things can gracefully return to normal rests on confidence that the people in charge, especially the Federal Reserve governors, are really, really smart and know what they’re doing.  The best minds are on the job.

Listening to the Canary

Despite all the mathematics that has been spray-painted on it, economics isn’t a modern science.  It’s a primitive science still weighted with cherished beliefs and unproven dogma. It’s in about the same stage of development today that medicine was in the 17th century, when the best minds of science were arguing whether the blood circulates through the body or just sits in the veins.  Today economists argue whether newly created cash will circulate through the economy or just sit in the hands of the recipients.

Let’s look at the puzzle the best minds now face.

If the Federal Reserve were simply to continue on with the money printing that began in 2008, the economy would continue its slow recovery, with unemployment drifting lower and lower.  Then the accumulated increase in the money supply would start pushing up the rate of price inflation, and it would push hard.  Only a sharp and prolonged slowdown in monetary growth would rein in price inflation.  But that would be reflected in much higher interest rates, which would push the federal deficit back above the trillion-dollar mark and also push the economy back into recession.

So the Fed is trying something else.  They’ve begun the so-called taper, which is a slowing of the growth of the money supply.  Their hope is that if they go about it with sufficient precision and delicacy, they can head off catastrophic price inflation without undoing the recovery.  What is their chance of success?

My unhappy answer is “very low.”  The reason is that they aren’t dealing with a linear system.  It’s not like trying to squeeze just the right amount of lemon juice into your iced tea.  With that task, even if you don’t get a perfect result, being a drop or two off the ideal won’t produce a bad result.  Tinkering with the money supply, on the other hand, is more like disarming a bomb—and going about it according to the current theory as to whether it’s the blue wire or the red wire that needs to be cut means a small failure isn’t possible.

Adjusting the growth of the money supply sets off multiple reactions, some of which can come back to bite.  Suppose, for example, that the taper proceeds with such a light touch that the US economy doesn’t tank.  But that won’t be the end of the story.  Stock and bond markets in most countries have been living on the Fed’s money printing.  The touch that’s light enough for the US markets might pull the props out from under foreign markets—which would have consequences for foreign economies that would feed back into the US through investment losses by US investors, loan defaults against US lenders, and damage to US export markets.  With that feedback, even the light touch could turn out not to have been light enough.

[Editor’s Note: To see what the consequences of economic mismanagement can be, and how stealthily disaster can creep up on you, watch the 30-minute documentary, Meltdown America.  Witness the harrowing tales of three ordinary people who lived through a crisis, and how their experiences warn of the turmoil that could soon reach the US.  Click here to watch it now.  This article, Listening to the Canary, was originally published at caseyresearch.com.]