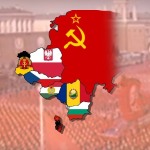 “The way to Hell is paved with good intentions,” remarked Karl Marx in Das Kapital.

The devious fellow was bemoaning evil capitalists for having the gall to use their own money for the express purpose of making more money.

Marx, a rambling busybody, was habitually wrong.  The road to hell is paved with something much more than good intentions.  Grift, graft, larceny, corruption and fake money are what primarily composes the pavement.  Good intentions are merely dusted in to better the aesthetic.

Right now in the United States we have a scam currency that’s controlled by central planners.  Specifically, we have what Marx envisioned in Plank No. 5 of his Communist Manifesto:

“No. 5.  Centralization of credit in the hands of the state, by means of a national bank with state capital and an exclusive monopoly.”

The Federal Reserve System, created by the Federal Reserve Act of Congress in 1913, is indeed a ‘national bank’ and it politically manipulates interest rates and holds a monopoly on legal counterfeiting in the United States.

The fact is centralized credit in the hands of a central bank always leads to money supply inflation.  Asset price inflation and consumer price inflation then follow in strange and unpredictable ways.

These price distortions are not defects of capitalism.  They’re symptoms of a scam currency managed by central planners.

The economy is a complex living organism.  It continuously evolves and is always subject to change.  One relationship at one moment can be completely different at another moment.  Supply and demand are incessantly adjusting and readjusting to meet the conditions of the market.

These continuous interactions provide a natural and efficient response to supply shortages and gluts.  Even in a moderately free market economy, bakeries do not run out of bread when there’s a wheat crop shortage.  The shelves never go empty.  Rather, the price of bread rises and consumers adjust their spending accordingly.

With the best of intentions, the noble planner makes their best guess of the appropriate price control.  So, too, graft and corruption takes over to ensure the fake money flows to preferred industries and providers.  Then things invariably go haywire.

The supply of certain goods or commodities may be more than adequate.  But when a price administrator enforces an artificially low price, consumers are prone to wasteful behavior.  They’re compelled to demand a greater amount than is supplied.  Hence, the store shelves remain perpetually empty.

Without market determined prices for goods and services via free exchange it is impossible to establish prices that reflect actual conditions.  Without prices that are grounded in reality the production and consumption relationship becomes distorted.  In the absence of the natural corrective mechanism of market determined prices, oversupply or scarcity conditions extend out to absurdity.

Regrettably, price controls don’t stop with just goods, commodities, and services.  The United States – like Europe and Japan – has been doing its darnedest during the early years of the 21st century to illustrate how the experiences of the old Eastern Bloc also apply to credit.

Someone with even a dim perception of the world around them can peer out and discern many strange and grotesque occurrences: Housing prices that far outpace incomes.  Total household debt at $14.56 trillion.  Crypto millionaires.  And an entire generation of Millennials that went $1.57 trillion in student loan debt for college degrees that have been debased in stature to what a high school diploma represented for prior generations.

These represent gross misallocations of capital.  What’s more, they would’ve never come into existence or ballooned out to this magnitude without the Fed’s credit market price controls and counterfeiting operations.

True capitalism requires an honest currency and market determined pricing.  Remember this in the weeks to come.  As prices rise, politicians and central planners – people like Alexandria Ocasio-Cortez and Janet Yellen – will look to pin inflation on evil capitalists and price gouging business owners.

Don’t believe their lies.  Just follow the fake money back to its origin…

There you’ll find the Fed, hard at work, applying the pavement to Karl Marx’s road to hell.