Finding Opportunities in a Bear Market

“I can calculate the motion of heavenly bodies, but not the madness of people.”

The remark was made by Sir Isaac Newton in 1720 upon losing £20,000 – a substantial sum at the time – speculating on South Sea Company stock.

The madness of people, as Newton painfully found, is incalculable.  It defies logic.  Runs on emotion.  And is best observed from a safe distance.

Newton may have been a brilliant mathematician and physicist.  But he was still an animal, just like the rest of us.  When it came to matters of money his actions were not governed by logic and calculation.  They were governed by fear and greed.

The madness of people – or crowds – may not be calculable.  However, it is most certainly measurable and observable…especially in the hindsight view of a stock price chart.

The South Sea bubble of 1720, like all good bubbles, was a fabrication of government.  Where an act of British parliament granted the South Sea Company a monopoly on new world trade so that, in return, it could finance the national debt…and at low interest rates to boot.

The promise of riches from trade in new, exotic lands stimulated the public’s fascination like loco weed to grazing cattle.  It didn’t matter that the promise of riches greatly exceeded the dearth of profits the trade actually delivered.  People were tripping over each other to get a piece of the action.

And the real action was in the paper trade, not the material trade.  The public soon fell under the delusion that ever increasing stock sales could make everyone rich.

Newton initially traded the mania with success.  He exited his positions early and with a profit.

But then the fear of missing out – the FOMO – took over as he watched his friends and neighbors all get rich.  Thus he went big. 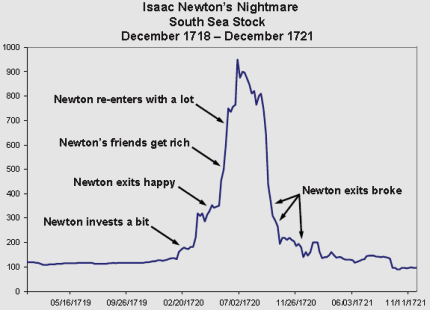 Newton, no doubt, was an animal.

If your portfolio’s taken a dive over the last five months, you can count yourself in good company.

There’s never a good time to enter a bear market.  But like a man or woman entering middle age, it’s best not to resist.

Accept the fate being thrust upon you and act accordingly.  In other words, ‘sell in May and go away.’

Moreover, suppress the urges to buy the dip until at least November 2023 – possibly November 2024.  Here’s why…

The depth and duration of a bear market must be inversely proportional to the madness that preceded it.

Without question, the madness that took the NASDAQ composite to 16,212, the Dow Jones Industrial Average (DJIA) to 36,952, and the S&P 500 to 4,818 was most definitely on the order of the madness of the South Sea Bubble.

What’s more, the madness that took these major indexes to their all-time highs (peaking roughly 6 months ago), greatly overshot the madness of the roaring 20s and the 1929 stock market peak.

Is it a fair statement to make, then, that the bear market we’re entering could be on the order of the late-1929 thru June-1932 bear market?  If so, wouldn’t it be sensible to revisit that carnage for inferences?

If you recall, the U.S. stock market commenced a multi-year swoon in autumn of 1929.  About that time, the economy also commenced a decade long Great Depression.

Given the rapid and relentless stock market carnage over the last month, and the prospect of a lengthy depression, a closer look is in order.

Finding Opportunities in a Bear Market

From September 3, 1929 to November 13, 1929, the DJIA lost 49 percent.  This freefall event included Black Monday and Black Tuesday, October 28 and 29, where the DJIA fell nearly 13 percent and nearly 12 percent on consecutive days.

Then, as rarely noted, the DJIA rallied 48 percent through April 17, 1930.  This had the adverse effect of luring the buy the dip crowd back into the stock market just in time for the next massacre.  Again and again this happened over the ensuing 26 months, as investors were repeatedly bashed in the face.

The 1929 through 1932 bear market, as noted by the late Pater Tenebrarum in the chart below, was like a rubber ball bouncing down stairs.  With each bounce, even the most savvy of investors were given another chance to lose their money.  Taken in sequence, the repeated bounces provided many opportunities to lose money over and over again. 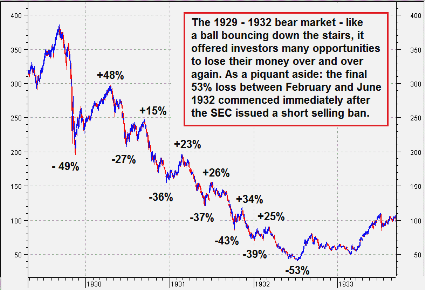 In the end, the bounce up between November 13, 1929 and April 30, 1930, turned out to be the ultimate sucker’s rally.  By June 1932, the DJIA had crashed 89.2 percent from its initial peak, along with the hopes, dreams, and aspirations of an entire generation.

The major stock market indexes may bounce over the next several weeks and months.  They may bounce a lot.  We advise viewing these bounces with suspicion.

The coronavirus stimulus wad has already been shot.  The Fed is merely just commencing its rate hiking cycle.  And until inflation abates, which could take years, the Fed’s abilities to bailout financial markets are limited.

Occidental Petroleum Corporation (OXY), for instance, is up 107.31 percent so far this year.  And Chevron Corporation (CVX), a Wealth Prism Letter portfolio holding, is up 39.04 percent.

There are plenty of opportunities out there too.  So long as you’re willing to look.

[Editor’s note: Bear market stocks are where it’s at.  And this doesn’t mean buying depressed shares of Netflix (NFLX) or Peloton (PTON).  Rather, we’re after businesses that don’t rely on low interest rates, government stimulus, or shiny object gizmos to inflate share prices.  If you’d like to join us in this endeavor, you can find out how, right here.]

Return from Finding Opportunities in a Bear Market to Economic Prism